GOB to sign SI for appointment of 13th senator 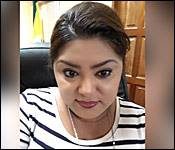 According to further allegations, she illegally used his official stamp on the documents to defraud Belmopan residents.

According to reports, when Mayor Belisle was presented with the fraudulent documents he was the one who immediately contacted Belmopan Police, who then detained Lopez for questioning.

While no charges have yet been brought against her, Lopez has since been relieved of her Events portfolio until police investigations are concluded.