Breaking: A business belonging to a prominent Belize City businessman has been raided by authorities 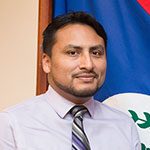 By BBN Staff: Senator Aldo Salazar, a government appointed senator, has officially been elected as the new chairman of the Senate Special Select
Committee today at a Senate meeting held in Belmopan.

The Senate Special Select Committee has been appointed by the Senate to investigate into the findings of the Auditor General’s special report which documented irregularities in the Passport, Visa and Nationality Departments.

Readers will recall that the report claimed that over 55,000 Belizean passports were issued with irregularities.

When the Senate met last week to name a chairperson, the opposition refused to participate on the committee and dubbed it, “bogus,” as its
composition gave government a majority and its terms of reference were limited in its scope to investigate.

Senator Mark Lizarraga, who represents the Belize Chamber of Commerce and Industry (BCCI) as well as the Belize Business Bureau (BBB), though present last week had protested against the composition and terms of reference for the Special Select Committee.

His colleagues from the social partners, NTUCB Senator, Elena Smith and Church Senator, Ashley Rocke both declined the position and so no chairperson was named at last week’s Senate meeting.

At a membership meeting held by the BCCI after last week’s senate meeting, it was voted that Lizarraga would not participate on the
Special Select Committee unless its composition and terms of reference were revisited and amended.

Both senators from the Opposition and from the BCCI/BBB were absent from today’s meeting.