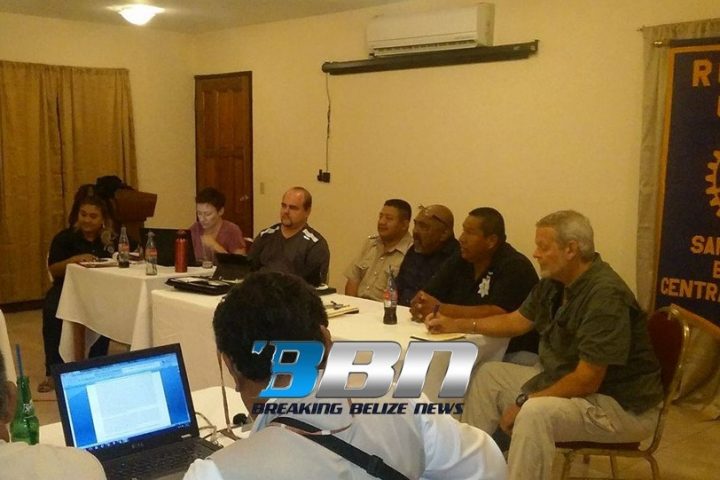 By BBN Staff: Last night, a joint meeting was held at the Aguada in Santa Elena town with members of the Cayo Neighborhood Watch Association (CNWA), People’s Coalition of Cayo (PCC),  Cayo Special Constables committee and the San Ignacio police in attendance.

The first of its kind, the meeting is to bring together the ideas of the members in creating a safer community by working with the police to better prevent and fight crime.

The Chairpersons of each committee explained the work that is being done by their respective committees and gave a brief history on the foundation of the committees.

The acting chairperson for the PCC is William Butcher, who explained that the Coalition (formerly the Crime committee) is there to provide support for the police and to help by acquiring resources that the police need.

The members of the Cayo community were receptive to this and joined to work hand in hand with the police in the prevention of crime.

This year, the Special Constables Committee has embarked on fundraising initiatives to purchase a vehicle solely for patrols in the community. With the successful fundraising efforts of this committee, they have been able to purchase their own uniforms and equipment.

Members of the community wishing to become a Special constable are required to enter a Citizens on Patrol (COP) program and after six months, participate in a training for Voluntary Special Constable (VSC) and then be sworn in.

The National Coordinator for the VSC and COP program is Rudolph Orio. Once sworn in as a Special constable, members are required to give in four hours of community service at the Police station. Most Special Constables are also members of Neighborhood Watches in their area.

Palma reiterated that the active participation of the community is crucial to assist the police in preventing crime.

The Chairman of the Cayo Neighborhood Watch Association, Ernie Braun also spoke about the importance of the three groups working together to better help the police in the community. These three community based entities fall under the umbrella of the Community Policing Unit headed by Cpl. Jason Jones.

The Deputy Officer Commanding San Ignacio Police, Daniel Iche also attended the meeting and gave an update on the crime situation in the community.

The Special Constables and the Police will be engaging in an anti-crime campaign beginning November 15.