The dollar exchange with Quetzal and Peso 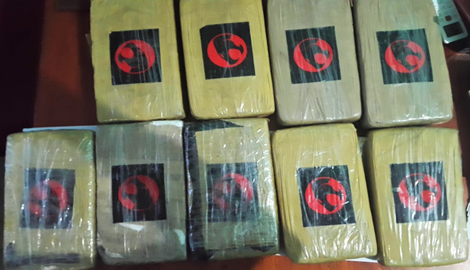 By BBN Staff: According to police reports, on Saturday based on intelligence, members of the Anti-Narcotics Unit conducted a highway interdiction exercise near the Philip Goldson Highway/Burrell Boom Road junction.

At around 9:00 a.m. an SUV was observed turning unto the Boom Road as if trying to avoid the checkpoint.

Police reportedly pursued the vehicle and made several attempts to signal the driver to stop.

However, when the vehicle stopped one of the occupants exited the passenger side and immediately fled into the bushes.

The vehicle which was heavily tinted then immediately sped off.

Police have not been able to establish how many other persons were inside the vehicle.

The male person who was observed carrying a bag was pursued, however, he made good his escape.

A search of the area resulted in the discovery of a red and black kit bag. The bag was opened and found to contain nine (9) parcels suspected to drugs wrapped in brown tape.

The bag along with its content were taken to station where it was processed and labeled as ‘Found Property’. The Anti-Narcotics Unit is currently investigating this matter.