BTIA 31st AGM to be held on December 1

Otto strengthens to a Category 2 Hurricane before landfall 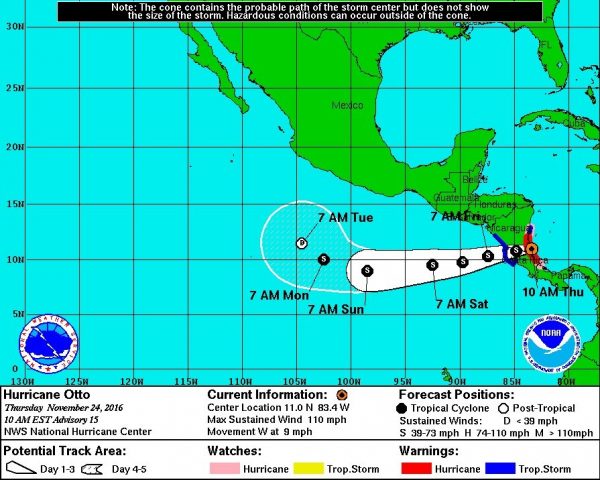 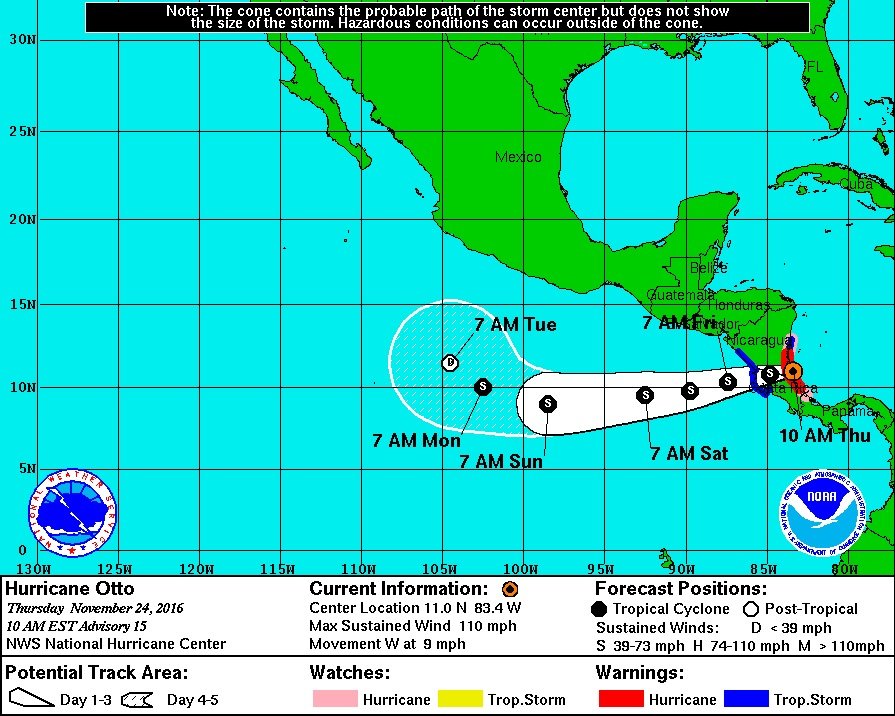 By BBN Staff: This morning, Otto’s winds increased to 110 mph making it a Category 2 Hurricane.

As of 9:00 this morning, Otto was located 75 miles south- southeast of Bluefileds, Nicaragua and was moving west at 9 mph.

The Hurricane center stated that Otto may even become stronger before it makes landfall.

The National Hurricane center said that Otto is a “ dangerous” storm that is expected to make landfall in the next few hours somewhere near the Nicaragua-Costa Rica border.  It was forecast to cross over Central America and move into the Pacific by tonight or early Friday.

According to the Hurricane Center, hurricane hunters from the Air Force Reserve penetrated the eye of the storm this morning and found it was intensifying.

It is projected that the storm could dump 6-12 inches of rain across northern Costa Rica and southern Nicaragua today. Some areas may even get 15-20 inches of rain.

This poses serious threats to Central America’s higher terrain, which could cause deadly flooding and mudslides, the Hurricane Center said.

A hurricane warning is in effect for Limon in Costa Rica to Bluefields in Nicaragua.

A hurricane watch is in effect from north of Bluefields to Sandy Bay Sirpi in Nicaragua as well as from south of Limon to the Costa Rica-Panama border.

A tropical storm warning is in effect from north of Bluefields to Sandy Bay Sirpi, Nicaragua, as well as from Puntarenas in Costa Rica to Puerto Sandino, Nicaragua.

If Otto manages to stay a tropical storm during its journey from the Atlantic to the Pacific it will be able to keep its name in a new ocean.

The last storm to switch oceans was Cesar in 1996. It got a new name, however, once it emerged into the Pacific.  Hurricane Center policy has since changed, and Otto will remain Otto if it holds together in the Pacific.

Otto is the seventh hurricane of 2016 in the Atlantic.