Would be robber reportedly paralyzed 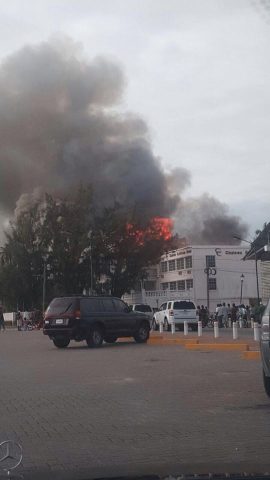 By BBN Staff: The historic Chateau Caribbean hotel burnt for 15 hours, during which fire officials reportedly doused the blaze with thousands of gallons of water.

In the process a fire fighter received injuries to his arm trying to smash a glass window to gain entry into the burning building.

The fire began sometime after 7 a.m. on Sunday morning and was brought under control at around 9 p.m. but was not completely out until shortly before midnight.

According to reports, the fire began in the kitchen of the establishment and thereafter devoured other parts of the building. Guests were quickly escorted from the building without injury.

Fire officials had difficulties entering the building as some of the flooring had collapsed. However, they gained entry from the third floor after a fire fighter removed some bars and smashed a window.

According to Fire Chief, Ted Smith, his officers were already exhausted before attending to the fire as they had been up from around midnight on Saturday battling a fire on East Canal in Belize City.

On Sunday social media was flooded with posts about the Belizean landmark from the colonial era. Known social commentator, Hector Silva via his Facebook page recalled that, “Chateau was first owned by the Biddle family, then it was owned by Doctor McCleary who established a Hospital by name Holden memorial. Finally by the Yum, C, Low family, who establshed a Hotel.”

Many Belizeans, at home and abroad, targeted harsh criticism at the fire department for its inability to save the historic structure. Fire chief Smith, however, maintains that his department did everything they could have done given the resources available to them.