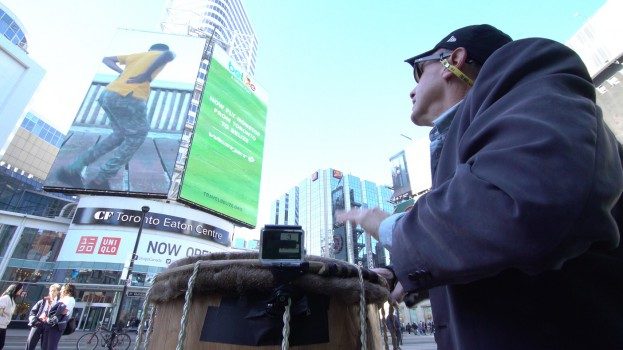 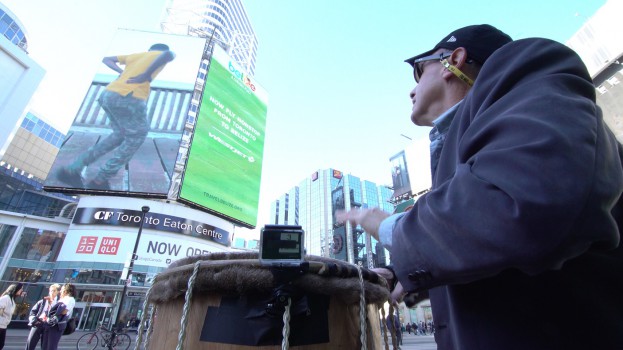 By BBN Staff: A two-day marketing initiative sponsored by the Belize Tourism Board (BTB) in Toronto, Canada has attracted reached 86,000 Toronto residents across Facebook, Twitter and Instagram, generating more than 18,000 video views and 4,800 engagements, measured by likes, shares, and comments. The promotion also saw 900 people playing a Belizean-crafted drum of the 292,000 people who passed and saw the display.

The BTB sponsored the initiative in promotion of WestJet’s new non-stop flights from Toronto to Belize. The Board retained creative agency Olson to develop the out-of-home activation and social media campaign.

The #TorontoBelize initiative invited people walking through Toronto’s Yonge-Dundas Square to play a custom-built Belizean drum that “measures” decibels to make a Belizean boy dance on a 90-foot digital board displayed over the square.

Street Factory Media custom-built the software that uses decibels to calibrate video speed in real time. The system is so sensitive, it starts and stops with the drum beat and the louder the drum beat, the faster the dance on the board.

The dancer will even ask and encourage passing drummers to continue playing, according to the agency.

Plus, to entice potential drummers, the campaign was giving away one roundtrip ticket from Toronto for two to visit Belize.

The campaign’s music concept was conceived during one of the agency’s exploratory visits. Agency executives met a local NGO called ‘Drums Not Guns,’ which aims to get kids off the streets by teaching them to make their own drums and use music as a positive outlet.

They realized this association would serve as a unique way of celebrating the region’s immense music scene as well as raising awareness for this group.

The drum itself also is meant to showcase Belize’s unique culture. The authentic, handmade drum from Hopkins, Belize was created by a local drum-maker named Jairo Diaz, who creates art and local instruments from the materials he forages in the Belizean jungle.

The drum is made of hollowed out redwood, vines, ropes and deer hide.