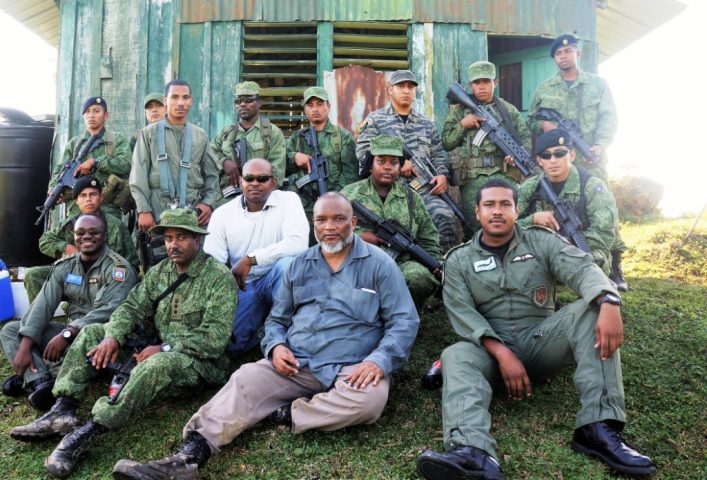 The national tour started in September, one month after Saldivar was named Minister of Defence and appointed a new Chief Executive Officer (CEO) for the Ministry of Defence, Lieutenant Colonel (ret.) Felix Enriquez.

Saldivar resumed his national tour in early November, heading up North to Corozal and Orange Walk where he visited BDF bases and posts, including those involved in curbing contraband and other illegal cross-border activities. On that leg, he was accompanied by BDF Deputy Commander Colonel Steven Ortega.

Two weeks later, he toured BDF installations in the West, again accompanied by BDF Deputy Commander Colonel Steven Ortega. It included a full tour of facilities at Camp Belizario and a special briefing on international military training in progress under Exercise Tropical Dagger, with participation by Jamaica, Canada, United States and Belize. Joined by CEO Enriquez, the Minister and his team did a flyover by BDF Defender Airplane of near-border posts at Arenal, Xunantunich and El Pilar, which were later visited on the ground.

By helicopter they visited BDF posts at Caracol Archaeological Site, Valentin Camp, Ceibo Chico and Rio Blanco, where they spent an overnight with the troops before flying back to Belmopan on the BDF helicopter.

Last week, the team undertook the southern and final leg of his tour, which took Saldivar by helicopter to Machaquilla, Santa Rosa and Cadenas (near the western and southern borders) where they spent the night, after which they were transported by boat to the Forward Operating Base at the mouth of the Sarstoon River. They later visited Fairweather Camp; the BDF camp at Tree Tops, also near the border; and Jalacte, a hotspot for illegal cross-border activities.

Saldivar’s final stop was last Friday at the BDF Drill Hall in Dangriga.

As part of his southern tour, Saldivar and his team had to endure an exhausting two-kilometer trek by foot through the jungle to the BDF Camp at Machaquila and back to the helicopter landing; as well as a steep and daring descent, also by foot, from the summit of the hill on which the camp at Cadenas sits, down to the Sarstoon River at the base of the hill.

This morning in a TV interview, Saldivar commented, “I was very happy to be able to complete the tour. It was a very difficult trail, but it went well; and I believe that I have been able to see first-hand, in much more detail than previous tours, what the BDF and soldiers of the BDF go through on a daily basis in carrying out their mandate to protect the sovereignty and territorial integrity of Belize. The tour itself has really opened my eyes to the conditions under which our soldiers are being asked to perform; and I’ve gained an even greater respect now for the officers of the Belize Defence Force.”

Saldivar expressed that emerging from his national tour, he has extra-motivation as a senior member of Cabinet to lobby for as much resources as possible to enable the BDF to better perform its functions. Saldivar is also responsible for the Belize National Coastguard. He stated that he intends to soon undertake a similar tour of the Coastguard’s facilities, command centers and forward operating bases.