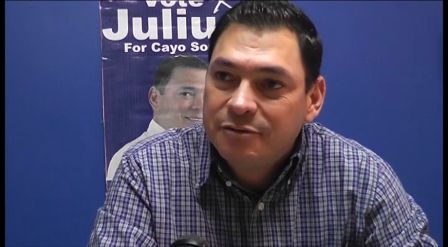 By BBN Staff: At today’s Sitting of the House, Speaker Michael Peyreffitee said that Julius Espat must apologize to the House.

PUP Fort George Area Representative Said Musa asked that Espat be reinstated to the House today. Musa said that four months have passed since he was suspended and it is time he returns.

In August, Espat was dragged out of the House by police officers. He said that the incident was instigated by the government, who did not want him to address the detailed instances of corruption in the Auditor General’s report on the Immigration Department.

Speaker of the House Michael Peyrefitte deemed Espat’s statements to be disrespectful and ordered him to sit. Later, Minister of Foreign Affairs Wilfred “Sedi” Elrington “named” Espat and moved that he be suspended from the House.

Espat had initially indicated that he would attend the meeting today but after consultation with his constituency, he explained in a press conference yesterday, that he would abstain from going and informed that he was made aware of a warrant for his arrest should he be seen near the House of Representatives today.

At the sitting, Peyreffitte did not make any changes and instead reiterated that Espat disrespected the House. Espat answered in a social media post saying he would not apologize.