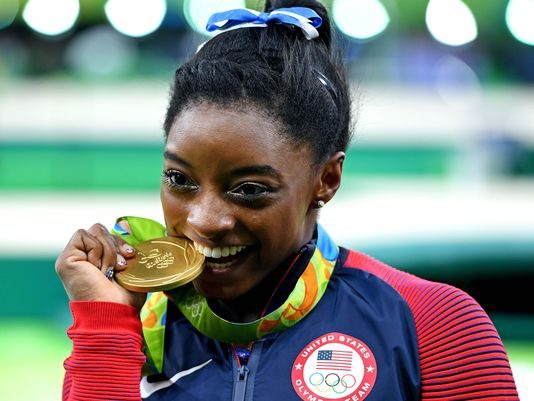 By BBN Staff: On Thursday, December 22, 2016, Simone Biles arrived in Belize and was received with a warm welcome and a motorcade.

The Belize Tourism Board had invited Biles after she made international headlines this past summer at the 2016 Olympics held in Rio de Janeiro, Brazil; winning four gold medals.

In several interviews, Biles shared her experiences in Belize and her relationship with her grandmother who is of Belizean origin. She also dominated headlines for claiming strong ties to Belize.

Following her historic performance in Rio, with a record tying four gold medals to go along with a bronze for the dominant U.S. women’s team, Biles has been given another honor.

Yesterday, in a vote by U.S. editors and news directors, Biles received 31 votes out of 59 for Associated Press Female Athlete of the Year. She became the fifth gymnast to win the honor.

On her official website, Biles included as a part of her Biography that she holds Belizean citizenship through her grandmother and that Belize is her second home.

She has posted pictures of her Christmas vacation with her family in Belize to her social media accounts.

The AP Male Athlete of the Year is to be announced today.