UB soon to have new President 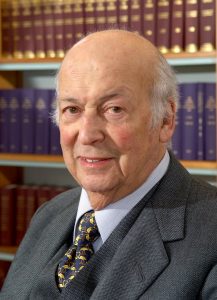 By BBN Staff:  He was a giant among men in the legal world but British international attorney, Sir Elihu Lauterpacht, passed away on February 8 at the age of 86.

He was known across many borders and inside many countries, which he represented in land and maritime boundary cases.

He also served as an ad hoc Judge of the International Court of Justice and an arbitrator for international disputes.

Additionally he served as a professor at the University of Cambridge.

He had advised several Belizean governments in the fight against Guatemala’s unfounded territorial claim.

He and Dr. David Bowett published the Belize: Joint Opinion on the claim in 1978.

In 2002 he was principal author and lead Counsel of the team of distinguished international lawyers who prepared the Legal Opinion on Guatemala’s Territorial Claim to Belize.

In 2016, Sir Elihu gifted his Belize Archives records to the local Archives and Records Service, to be used exclusively by those diplomats and lawyers engaged in seeking resolution to the claim, particularly if the matter is submitted to the I.C.J.

He was also bestowed awarded the Order of Belize.

Lauterpacht leaves behind his second wife and their four children.

BBN expresses it’s condolences to his family and thank him for his selfless contributions to Belize.