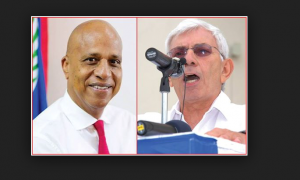 By BBN Staff:The Opposition People’s United Party (PUP) has gathered much ammunition and even political mileage from the hearings conducted by the Senate Select Committee.

Figuratively speaking, PUP officials and supporters weekly gather their popcorn and tune in to the widespread corruption of the UDP authorities revealed during the hearing.

However, on Wednesday, the PUP ran for cover when Senior Immigration Officer, Gordon Wade, told the committee that the practice of massive immigration nationalization to get more voters on the voters’ list before election was not a new practice.

He went on to say that it was done by previous PUP and UDP governments.

According to 7 News their records indicate that the Musa administration  swore in, with intent to register, over 1,000 new nationals in a closed door session just two (2) months before the 2008 general election. Despite this Musa’s PUP lost the 2008 election in a landslide.

PUP Party Leader John Briceno had earlier accused the UDP of stealing the 2012 election claiming that the administration of Prime Minister Dean Barrow, granted nationality and registered 2000 new voters, despite not having met the requirements for nationality, just in time for the 2012 elections.

Former Immigration CEO, Ruth Meighan, confirmed to the Senate Investigation Committee on January 25th 2017 that many of those who received nationality before the 2012 election did not meet the requirements.

However, it is not yet known how many, if any, did not qualify for the documents received by the Musa Administration.