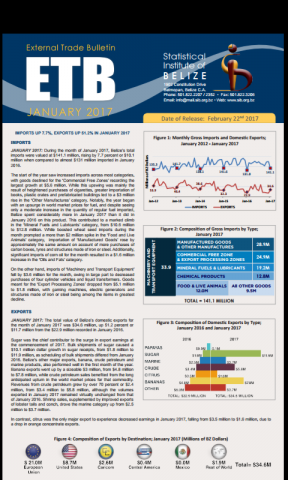 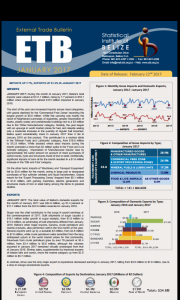 By BBN Staff: After several consecutive months of underperforming, Belize’s exports increased by 51.2 percent at the beginning of 2017.

The latest External Trade Bulletin released by the Statistical Institute of Belize (SIB) showed that exports were valued at $36.4 million, a notable $11.7 million more than the $22.9 million recorded in January 2016.

The sugar industry’s late bulk shipment played a major role in the export rebound; however, Bananas, Marine Products and Crude oil, also performed well in January. Bananas went up by $3 million, from $4.8 million to $7.8 million, while Marine Exports rose from $2.5 million to $3.7 million. The SIB explained that the shrimp sales were supplemented by lobster tail and conch sales to help drive the increase.

Crude petroleum sales benefited from the long anticipated upturn in the world market prices, bringing revenues back up from the free fall it experienced in 2017.

“Revenues from crude petroleum grew by over 70 percent or $2.4 million, from $3.4 million to $5.8 million, although the volumes exported in January 2017 remained virtually unchanged from that of January 2016,” SIB said.

However, the country’s oil supply is running dangerously low, and with no companies currently performing oil exploration in Belize, the industry may flat line completely by 2021, when the Geology and Petroleum Department estimates that the oil reserves will be completely exhausted.

Citrus was the only major export to experience decreased earnings in January 2017, falling from $3.5 million to $1.6 million, due to a drop in orange concentrate exports.