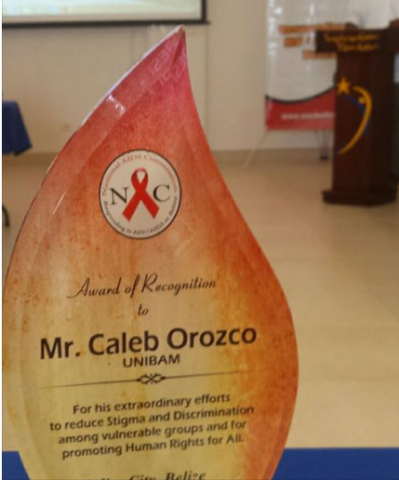 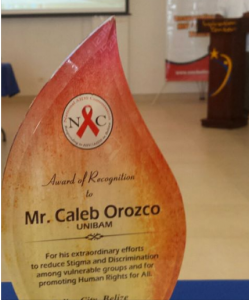 By BBN Staff:The National AIDS Commission (NAC) has awarded Caleb Orozco, in recognition for his contribution to the national HIV response in reducing the stigma and discrimination associated with HIV.

Executive Director of the NAC, Enrique Romero, said that the commission decided to recognize Orozco’s efforts in light of his local and international advocacy for men who have sex with men (MSM), a key vulnerable population, targeted in the national HIV response.

“It seems to be a flaw we have here in Belize, we never seem to give our own enough credit for the things they do,” Romero said. “He’s gotten all this international recognition, but no recognition locally.”

Romero said that the NAC took a decision at its recently concluded quarterly meeting, to highlight more Belizeans who have taken tangible steps in aiding the national response. He added that the commission has several awardees considered, but could not disclose the names ahead of the next award issuance.

“If it was not for our community organizing we would not have had a political shift in tone. Thanks for the help, visible and invisible,” Orozco said.

Caleb Orozco, co-founder of the United Belize Advocacy Movement (UNIBAM), has been advocating for the rights of the LGBT community in Belize since 2006. In 2016 Orozco successfully challenged Section 53 of the Criminal Code in the Supreme Court of Belize. As a result of his challenge, the court amended the law, which criminalized homosexual relations, to exclude acts done between consenting adults.