Two Belizeans killed in Guatemala in less than a week 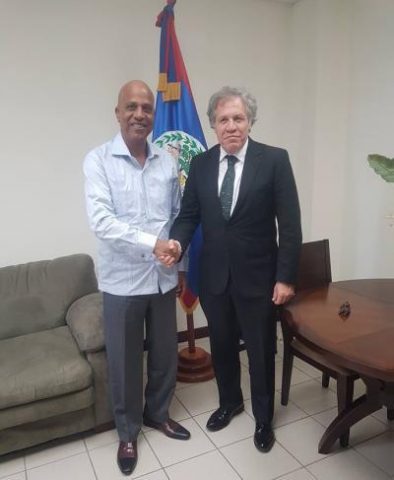 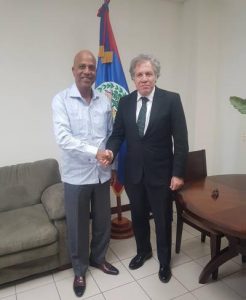 By BBN Staff: Secretary General pf the Organization of American States (OAS), H.E. Louis Almagro, completed a two day tour in Belize this week, as the Government of Belize continues its push to hold a referendum on taking the Guatemalan territorial claim to the International Court of Justice (ICJ).

During his brief visit, Almagro held meetings with numerous government officials, the Leader of the Opposition, took a helicopter ride over the Chuquibul National Park, including Belize’s side of the Adjacency Zone, and held a press briefing.

The briefing did not offer much information, save that of a brief summation of his visit, and the media was not permitted to ask any questions.

During his brief, prepared speech, Almagro, said that the OAS will be working with Belize and Guatemala towards implementing mechanisms to better managing “incidents” at the border. He said that the need to go to a referendum as soon as possible, was a key point if discussion in his various meetings.

“We are strengthening the case of going to the ICJ, because we all have to believe, and we believe especially, that the solutions should be according to law and according to right,” Almagro said.

Almagro’s visit brings several topics of discussion to the forefront, including the continued depletion of Belize’s natural resources by Guatemalan poachers; continued aggression against Belizean authorities by both Guatemalan civilians and military personnel, and Guatemala’s continued disregard for international law when dealing with the border issue.

In 2016, the OAS presented the findings of the expert investigation into the shooting death of Guatemalan minor Julio Alvarado in Belizean territory. The report showed that Alvarado and his family had fired upon Belizean officers, when he got shot by a park ranger in the exchange. Instead of apologizing for making unfair characterizations about Belize in international circles, the Government of Guatemala called for the removal of the OAS representative that presented the findings.