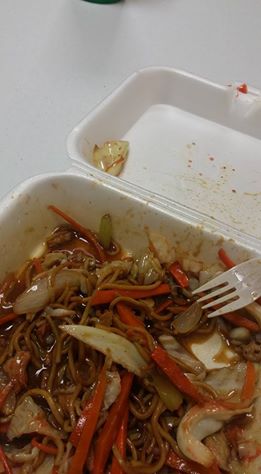 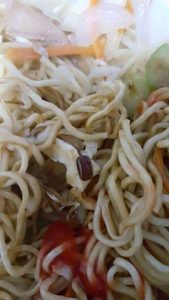 By BBN Staff: Belizeans, for better or worse, depend heavily on fast food restaurants all over the country. Fast food restaurants offer the convenience of speed and low cost, with the downside of being a less than optimal healthy alternative. To this end, Chinese restaurants in particular, have benefited greatly from Belizean consumers. Apart from rice and beans, fried chicken is close behind in the national dish race.

A recent video posted on Facebook, however, has raised mass concern over the quality of sanitary conditions in restaurants across the country. In the video and accompanying caption, a young woman claims to have purchased food from a restaurant in the south and, chillingly, the video shows a piece of chicken infested with worms. The video prompted a wave of concern over sanitary conditions and food quality.

Just last November, Ministry of Health officials were called in to evaluate a Belmopan restaurant following another troubling complaint. That restaurant was forced to close its doors until it was able to meet sanitary standards, however, the problem persists in other establishments across the country. It is a very serious matter that requires urgent attention, especially when the health of consumers is jeopardized for a quick buck.

Take for instance the Belmopan restaurant, which came under scrutiny for being infested with rodents; rats to be specific. It was closed for two days before the Ministry declared that the owner had complied with all its recommendations. Any establishment can clean up its act for a few days before resorting to the same unsanitary practices as before. It is a serious public health concern, which requires stringent regulation and follow-up inspections.

BBN, this week contacted the Health Department, in an attempt to seek clarity on the matter. We were told that there is a public health inspector assigned to each district and, according to the Department, health inspections are done on food establishments every three months. This, however, is obviously not enough to ensure that these restaurants meet basic health standards.

According to an official from the department, in severe cases that are reported, the inspection is done immediately and the restaurant is given up to two weeks to make changes to comply with the regulations. In these instances, some establishments are closed immediately and if they fail to comply, they are taken to court. The Health Department officer, however, disclosed to BBN that penalties for these non-compliant establishments are not “stiff” and therefore, cases are rarely ever taken to court.
The public is advised to report establishments operating in unsanitary conditions to the Department of Health or their local health inspector.