What is happening in Belize? 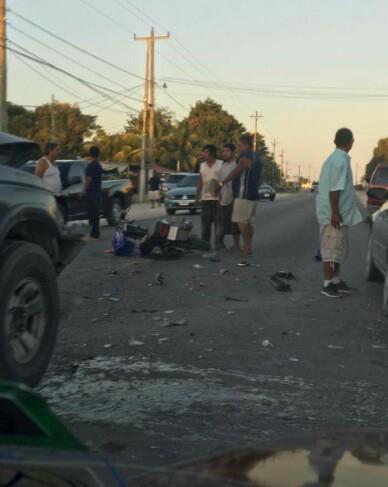 By BBN Staff: When it rains it pours, and Belize is drenched in blood after a truly tragic week of murder, fire, road fatalities and freak accidents. Tragedy, all in the wake of an uncomfortably tight rope Belize must now walk as its economy and prospects suffer; and the belt is expected to tighten even further in the years ahead.

How many people have died or suffered great loss this past week? Nine people have been murdered during that time, and another police officer is recovering from an accidental gunshot wound. Almost 50 families were left homeless in the wake of a massive inferno in Majestic Alley. Fires also raged in Caye Caulker and again in Belize City. Blood has washed over the City streets as this cruel urban warfare continues to claim sons, fathers and brothers. Three people died in unfortunate road traffic accidents. A man calmly walked into one of the largest police compounds in the country and stabbed a police officer dead! There is much pain in Belize right now. And all while this is happening, parliamentarians debate the budget but are short on vision, knowledge, will and integrity.

Surely, the government cannot be blamed for all of society’s ills, but the rotating cast of powers that be have certainly contributed to the rapid decay of the country’s economy and societal morality. Corruption reigns supreme in this Jewel. There are even scientific surveys which suggest that corruption not only harms a nation’s prosperity but also shapes the moral behavior of its citizens. And with an already fractured sense of morality and an increasingly jaded and disillusioned generation growing up, it is no wonder that death is far more common than in the days elderly Belizeans reminisce about.

At this rate, 10 murders a week will soon seem completely normal. Something obviously needs to change. We cannot continue on this path. And that does not mean the onus should be on the police department. Sure, police need to become more effective and hire or train more competent personnel but there is much more that needs to be done. Belize’s weak judicial system must be strengthened to improve conviction rates and ensure that criminal offenders do not walk free from very serious charges, including murder. But beyond that, and perhaps most importantly, sweeping reforms in government need to be implemented to guarantee oversight and transparency over public affairs.

There is no accountability, especially not from politicians, their families and mindless minions. And as blatant as it all is, Belizeans allow the corruption of a few to burden the way of life for the masses. With the budget having been passed, the first winds of this storm have started blowing in. Belizeans will soon come to understand what the warnings meant. It means an already difficult way of life getting even harder, especially for the poor.

The restructuring of the “Superbond”, which has been heralded as some saving grace, is not nearly as sustainable as the government has made it appear. Financial experts have attested to this. And the recently passed budget is a direct result of those new terms, which include a condition for a 3 percent fiscal consolidation this year and GDP growth of at least 2 percent for each of the following three fiscal years. Most Belizeans don’t even understand what that means but it will affect us all.

The agricultural industries took major blows over the past two years and are just looking to recover. A recession rages on and NGOs are concerned about GOB’s decision to raise the departure tax for tourists. The tourism industry is extremely important to Belize and now the Belize Tourism Industry Association (BTIA) fears that the hike in the departure tax could have an adverse on the industry. On Monday, the Senate voted against the PACT Amendment Bills, within which the provision for increasing the departure tax is contained. But despite being rejected by the Senate, this country’s Upper House, the government is still pushing the bill forward to the Governor General for ascension. How’s that for democracy? Granted, the changes need to happen given the new terms of the 2034 Bonds.

These are the immediate problems, but the corruption that has spread to every corner, crevice and government department has trickled down all the way to streets, resulting in blood. When will Belizeans get enough or are we that patient a society to keep waiting for the best to come? The cost of living will go up, that is for certain. It is already been happening, and has been for quite some time. Yet the blue and red point fingers at each other and sit and laugh and get fat and use the National Assembly to make a mockery of the democracy we evidently do not have, all the while, Belizean are left with the short end of a pretty crappy stick. Change needs to be swift or we are headed down an even darker path.