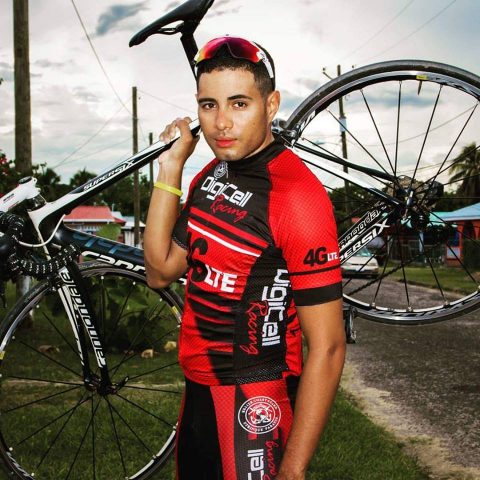 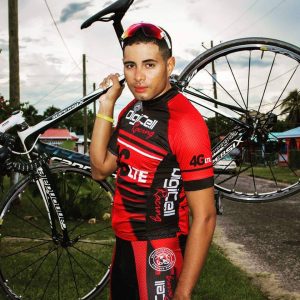 By BBN Staff: Belmopan cyclist,  27-year-old Tariq Aguilar-Cano was born and raised in the capital city and fell love with the sport of cycling at the age of 11.

Cano’s passion for the sport earned him the distinction of being one of the best junior All Around Cyclist of his time, winning his first race, King of the Hills Classic, at the age of 15 in a solo match. He then went on to win numerous races which gave him the opportunity to represent Belize in Guatemala, Cuba and the United States in an honorable fashion.
Cano was also featured on the 2013 Belize Apprentice TV show, which showcased his capability to work hard on various levels. Following his success, he was later employed at the Belize Bank as a marketing officer for credit card and sale.

Cano always believed that everyone should follow their dreams, and his dream was to race in Europe.  He geared back onto the cycling path, racing and looking for the doors to open that would lead him to the cycling capital of the world, Belgium. Cano has started a non-profit organization named C.A.N.O (Committed to Altruism and Nurturing Oneself). The organization is geared toward helping individuals accomplish their goals and to encouraging a positive community setting.

Cano said that he created the organization “to create success to develop our world! To dream big and flourish the world with life changing moments – to never give up on others or my community!”

The vibrant young cyclist is hoping that by being the first Belizean Cyclist to make it to Belgium, he can help advance the sport to a higher level for future cyclists in Belize.

“Every cyclist’s dream is to ride in Europe, but most individuals are afraid to take that extra step. Currently, no-one wants to be the first to compete in Europe because with it comes the fear

of failure. Being the first Belizean to make it to Belgium is not my main objective, what matters

standard. My dream is to see a Belizean at the Tour de France; it might not be me, but my plan

is to see a Belizean make it in my life time!” Cano said.

In order to achieve his goal of participating in cycling in Belgium, Cano needs a total of $8,825 to cover all expenses.

The young cyclist is seeking sponsorship to assist with the cost of these expenses. Persons interested in helping Tariq can contact him at 654-1689.