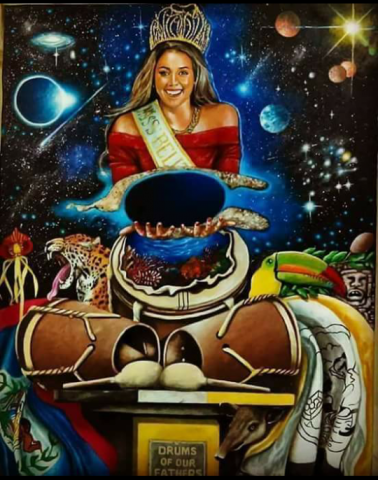 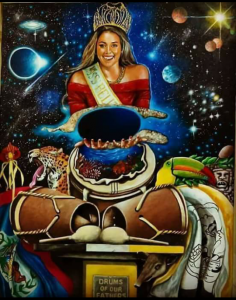 By BBN Staff: Veteran painter Alex Sanker is calling on Ms. Belize, Rebecca Rath, to return the painting he did for her to give as the national gift at the 2017 Ms. Universe pageant.

Sanker explained that he was informed that Rath never gave the painting as she was supposed to, but rather gave a piece painted by Penn Cayetano. Sanker maintains that the piece has significance both to Belize and himself and should be returned since it was not used for its intended purpose.

“They should either give it back to NICH (National Institute of Culture and History), so it can form a part of the national collection, or, back to me,” Sanker said. “I have so much invested in that painting, I am prepared to reimburse NICH for it.”

Sanker said that after NICH commissioned the piece, he cancelled his scheduled Christmas vacation to have the piece ready in time for Rath’s participation in the Ms. Universe pageant. Sanker added that he was outraged to find out, through social media, that Rath not only used another painting, but also reportedly lost his while in the Philippines.

Tony Rath, Rebecca’s father, confirmed in his five-part blog, “The Rocky Road to Ms. Universe” that he had received the painting that NICH commissioned, and that he had bought one from Penn Cayetano to use instead. Rath, however, said the painting had been lost during the flight to Manila.