San Pedro selected as one of world’s best honeymoon destinations 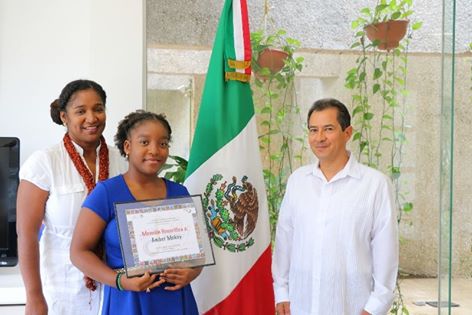 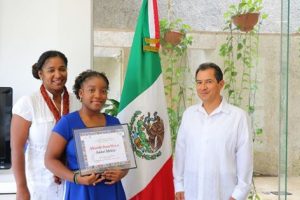 By BBN Staff: The Ministry of Foreign Affairs of Mexico through the Institute for Mexicans abroad promotes the “Let’s Draw about Mexican Music and Traditions” children’s competition annually.

Children from around the world participate by submitting their paintings depicting the Mexican culture and traditions.

“Este es mi Mexico” is the 21st event of its kind.

This year, over 1,000 children submitted their paintings. Eleven-year-old Amber Mckoy from Grace Primary School in Belize City submitted her painting and was honoured yesterday by the Mexican embassy in Belmopan.

Mckoy was presented with an honorable mention for her outstanding painting. Amber’s work along with 61 other drawings from children around the world will be exhibited in Mexican Embassies and Consulates around the world.

Mckoy’s painting will also be featured in a calendar done yearly featuring this year’s 12 best paintings.

Mexican Ambassador to Belize Carlos Quesnel told BBN that the prizes for the top 12 selected paintings include a one week trip to Mexico. Quesnel told us that they are proud and happy to feature Amber’s painting and to be able to present it at the embassies and consulates around the world.

“Amber’s paintings depicted Mexican elements and she has the potential to be a great artist,” Quesnel said. Mckoy’s sister participated in the same competition ten years ago and was also selected as one of the top 10. The competition began ten years ago involving only Mexican children. It was later changed to allow children from over the world to participate in the competition.