Commercial mission held in Belize by Embassy of Mexico

Belize exports up 25.1% in first quarter 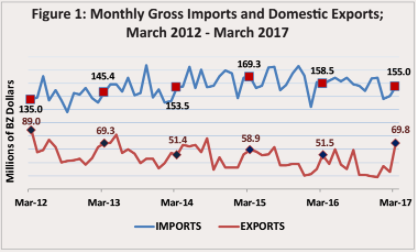 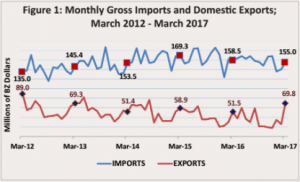 By BBN Staff: Belize’s exports for the first quarter of 2017, January-March saw a 25.1 percent increase when compared to the same period in 2016, according to the Statistical Institute of Belize (SIB).

The SIB said that four of Belize’s major exports: Sugar, Crude Oil, Bananas, and Marine Products, all had strong performances to spur the increase.

Sugar earnings went up by $12.7 million, from $31.4 million to $44.1 million for the three-month period. Revenues generated from crude sales, also saw another increase, $8 million, taking it  from $3.4 million in 2016 to $11.4 million. The SIB attributed the increase to higher world market prices for oil.

Banana exports had a major increase, going up by more than 50 percent. First quarter banana sales jumped from $15.3 million to $23.2 million for the period. Marine products also performed positively, as improved shrimp and conch exports prompted a $2.2 million revenue increase.

“Merchandise imports for the first quarter of 2017 totaled $431.6 million, representing a 2.9 percent or $12.8 million decrease from the same period last year,” the SIB said.