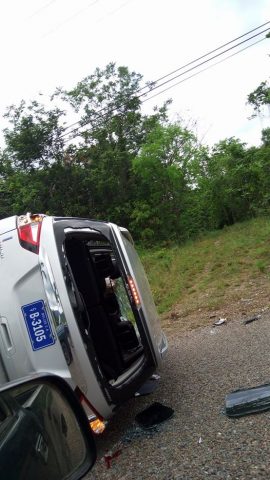 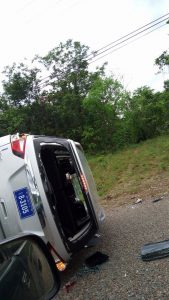 By BBN Staff: A government vehicle was involved in a road traffic accident over the weekend. The incident reportedly took place at around 3:00 p.m. on Sunday on the Hummingbird Highway.

The vehicle, seen near the middle of the road, caused a brief stoppage in the flow of traffic.

Police have not yet issued an official report on the incident.

In August 2016 Financial Secretary Joseph Waight had issued a memo to government departments enforcing the vehicle policy, stating: “All vehicles, except those authorized for twenty-four (24) hours use, should be garaged at the end of each day, on weekends and on public and bank holidays at a secure designated location…”

Waight, in his memo, detailed cases where authorization forms were not being used by Public officers traveling in vehicles after working hours, weekends and public and bank holidays. “For the most part, they were not doing or providing any service on behalf of the Government to the citizens of Belize,” the memo added.

The memo also noted penalties for not adhering to the policy, including: Impounding of vehicles by the Vehicle Care Unit and transport department personnel; a reduction of 20 percent in monthly fuel allocation for unauthorized use of vehicles; and penalization of drivers in accordance with Section 5.3 of the Disciplinary Procedures.