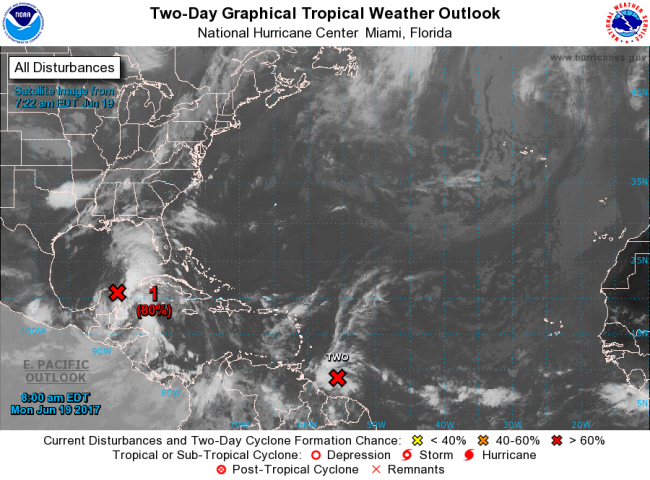 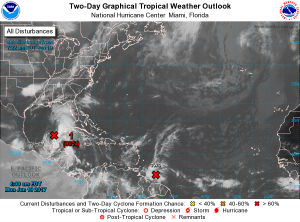 By BBN Staff: The 24 hour forecast is for cloudy to overcast skies with showers and thunderstorms especially over inland areas this afternoon.

Showers and thunderstorms are expected over most areas tonight.

A broad low pressure system over the area will support moist and unstable conditions across the country.

The winds will blow from South to Southwest at 5-15 knots.

The sea state will be moderate to rough.

The public is advised to be on alert for flash flooding near streams and rivers. There is also a threat of localized flooding along low lying coastal areas.

Small crafts are advised to exercise caution for gusty winds and rough seas near heavy showers and thunderstorms.

The outlook for Tuesday and Tuesday night is for more moist weather to continue.

The NHC says that there is a 90 percent chance of formation over the next 48 hours.

A broad area of low pressure extending from the Yucatan Peninsula across adjacent portions of the southeastern Gulf of Mexico continues to produce a large area of disorganized showers and thunderstorms along with winds to gale force several hundred miles east and northeast of the estimated center. While the low pressure still lacks a well-defined center of circulation, gradual development is expected today through Tuesday while it moves across the southern and central Gulf of Mexico, and a tropical or subtropical cyclone is likely to form.

Heavy rains are expected to continue over Central America, the Yucatan Peninsula, the Cayman Islands and Western Cuba.

According to the NHC, an air force reserve hurricane hunter aircraft is scheduled to investigate the system today, if necessary.