Another Castro Scandal: Cayo businessman claims Minister is covering up for son 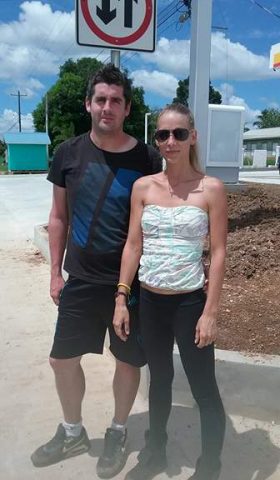 By BBN Staff: Two Belgian tourists contacted BBN today to plea for assistance from the Government of Belize, the Ministry of Foreign Affairs or any relevant authority.

Allan Dropsy and Jagoda Cwojdzinska, the two Belgian tourists, are asking for any assistance that they can get.

Dropsy told BBN that they had purchased a vehicle in Mango Creek from a person they trusted but the man then reported the vehicle stolen.

According to Dropsy, he and his girlfriend traveled to Cayo for a visit but were detained at taken to the San Ignacio Police Station.

Dropsy told BBN that the officers took his bag with his passport and BZ$550. After being held for 48 hours, he claims he was released but when he was given back his bag it only contained his house keys.

He claims he questioned the officers about the passports and the money but the officers reportedly claimed they knew nothing about it.

Dropsy says the officers told him and his girlfriend: “ You are not in your country, you cant say anything.”

The couple says they feel helpless since they are in a foreign country and are extremely worried they may not be able to return home since they have lost their passports.

According to Dropsy, they met with the Deputy Commander of the San Ignacio police station who told them that he had checked with the arresting officers and no one had seen the passports.

Dropsy, however, says he fails to understand how the passports just disappear from the police station. The couple is seeking the help of any relevant authority to assist with recovering their money and passports so they can leave Belize and most likely never return.