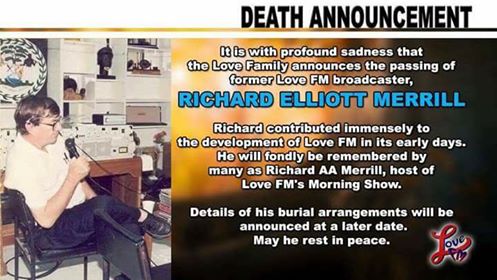 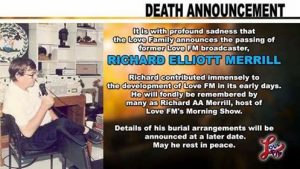 By Richard Harrison: Richard Merrill was Belize’s very own “Harry Carey” of everything Belizean on radio….having been for many years like the morning coffee of sporting, environmental and cultural activities throughout Belize…a cheer leader….a picker-uper.

Goooooood morning Belize!! he would shout early in the morning, as if a rooster crowing from our roof tops.

He was so enthusiastic about the La Ruta Maya Belize River Challenge from the very beginning….we worked very closely, as he helped form the core of the Love FM live broadcast team in the early years, to cover the event. I am very grateful for all the help and attention he encouraged and brought to the event in those cultivation years.

He seemed happiest when among the working people….especially when covering the “Village Life” events in many villages across the country…..always promoting what the people produced…what challenges they were facing….what opportunities were open to them…allowing their voices to be heard, no matter how humble. His voice was unique and he spoke in a clearly understandable way, with a balanced tone.

Richard sought the good in everything….he tried to keep his discussions level and fair, without being a push over…..and to allow all sides of a story to be told. He was certainly a gem in the Love FM media-broadcasting crown….and a good example to his media colleagues in the communications industry.

This young man seemed a loner when not on the radio circuit….always taking the bus or walking alone….going somewhere….from Barranco to Chunux, he seemed to know every inch of Belize.

His working space was a cluttered, disorderly maze of radio and electronic gadgets, which he ordered to make a broadcast function. So he was not only a broadcaster….but also a skillful technician.

The last few years he kept his head low and out of sight…perhaps contemplating his next step….and have now passed into the world of the beyond.

May the mighty heavens receive him with a massive welcoming party!