No charges against Penner yet

Man knocked down in Roaring Creek 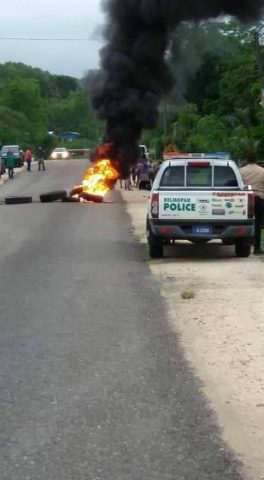 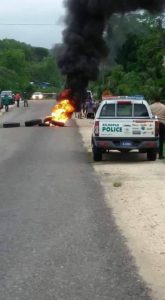 By BBN Staff: On Saturday afternoon, villagers from Teakettle temporarily blocked the George Price Highway in that village.

According to reports, a villager has been missing for six days and the community believes the police are not making it a priority to locate the missing man.

Officer Commanding Belmopan Police, Sr. Supt. Howell Gillett explained the situation to the media: “What happened was that a person went missing and they felt the authorities weren’t doing enough to dive for the person. The reality is that police doesn’t have divers and we depend on the coast guard. The problem is that the coast guard does not permit their divers to dive in flooded waters due to strong currents and poor visibility, which was the case. This did not stop the police to spearhead land searches and river patrols along with community members in an effort to locate the person.”

According to Gillett, yesterday the coast guard participated in diving exercises which have been “… fruitless to this point.”

The family and friends of the missing man were not satisfied with their efforts and lit tires on a portion of the highway in Teakettle village causing disruption of traffic for about half hour.

The Police and Fire department responded quickly and the fire was put out and debris removed.

“It’s an unfortunate occurrence and is not deemed to be the preferred way of protesting. We continue to investigate the disappearance of this villager and family members are kept abreast,” Gillett added.