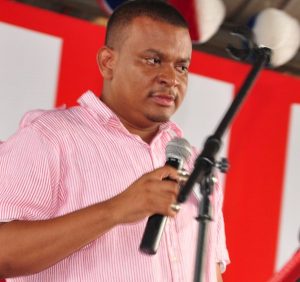 By BBN Staff: Deputy Prime Minister, Patrick Faber, despite the lewd behavior of his ministerial colleagues at the Senate inquiry, insists that their behavior towards the senators was not intentional.

Faber, denied having any knowledge about the conduct of Ministers Anthony “Boots” Martinez and Edmond Castro, saying that he was waiting for the evening news to get an update.

He did however, insist that it is not the strategy of his party to create tension at the ongoing public hearings.

“I don’t know of any such strategy; no there is no strategy on the part of colleagues to go there to create that kind of trouble for the committee no,” Faber said.

While Faber plays defense for his colleagues, the People’s United Party (PUP) issued a statement condemning Castro and Martinez’s conduct in the strongest.

The PUP said that their conduct displayed a lack of respect for the Senate and the office which they hold. The party said that, as Belizeans, they were ashamed of the proceedings, which they know will be broadcasted regionally.

“Our regional and foreign partners will observe this shameful display from those who are, regrettably, in leadership roles in this country,” the PUP said.

Castro’s and Martinez’s appearance at the inquiry is the first time that seated ministers of government have appeared before the committee.