ComPol on why police have not investigated Immigration scandal 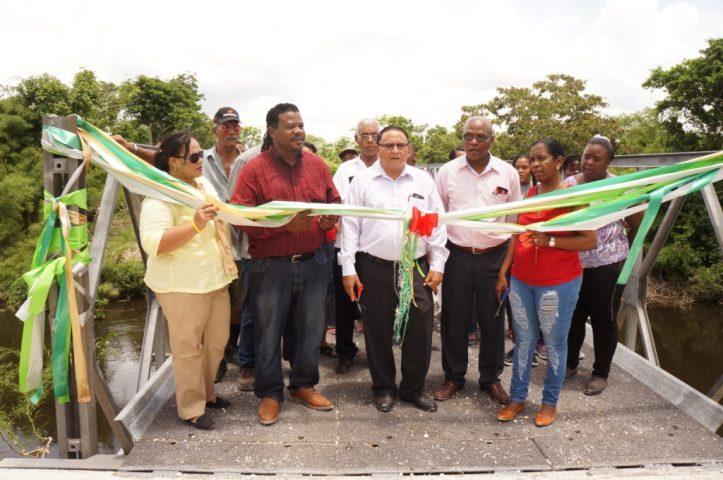 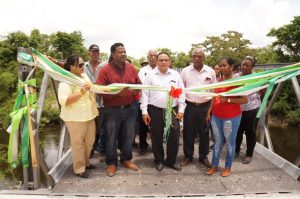 By BBN Staff: A new bridge on the access road to May Pen Village in Belize Rural North was inaugurated yesterday, July 19.

The bridge, a one-lane foundation structure, is the result of a donation from United States Southern Command (USSOUTHCOM) and an investment of $256,000 by the Government of Belize.

Main Speakers at the inauguration ceremony, which was held at the foot of the bridge, were Minister of Works Rene Montero and Minister of Transport and National Emergency Management Edmond Castro.

A historical perspective was presented by a villager, Carl McCulloch. The welcome address was delivered by the Vice Chairlady of the Village Council, Joy Marie Moody-Reyes; and the Vote of Thanks by former Chairlady Olivia Moody. The ceremony was chaired by Ruth Staine Dawson from Gardenia, who is Chairperson of the Belize Port Authority.

McCulloch explained, “We’ve been waiting for this for a lot of years now because the old bridge got messed up, rotted. They fixed it, it broke again several times. So, for about the last ten years, we’ve been at a position where no dump-truck could go in and dump the road, so it was in horrible condition. Even four-wheel-drive vehicles couldn’t make it during the rainy season.”

Castro stated, “For 34 years, they’ve been waiting for a better bridge; and I promised them in 2008 that once I got elected, I would facilitate and I would work hard to make sure that we put a better bridge here for May Pen. This is not just for May Pen; this is for Belize.”

The symbolic ribbon to inaugurate the bridge was cut by Castro and Montero along with village leaders of May Pen.

The bridge was blessed by Pastor Hugh Tillett of Biscayne.