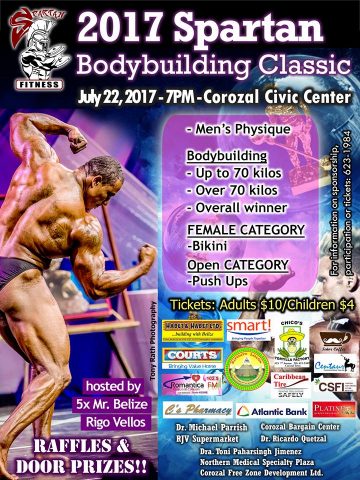 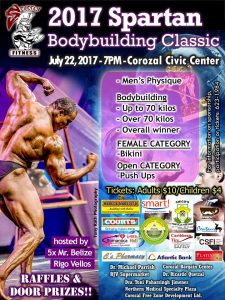 By BBN Staff: Bodybuilding athletes from around the country will converge in Corozal Town today for the annual Spartan Bodybuilding Classic, a fitness and muscular development competition organised by 5-time Mr. Belize, Rigo Vellos.

While the competition normally features Belizean athletes defending their home turf against Mexican athletes, this year an up and coming American bodybuilder has signed up and will be putting the physique athletes to the test.

The Spartan Bodybuilding Classic commenced in 2013, a year after Vellos won his first Mr. Belize title.

He told BBN that he wanted to make a contribution to the development of the sport in Belize, his local community, and the hosting of an event that would attract visitors to the town.

He added that our local athletes stand to benefit tremendously with more competitions, and in particular standing toe to toe with athletes from other countries.

Vellos speaks from first-hand experience as over the years he has taken on the challenge of representing Belize on a number of competitions throughout Mexico. His name has become well-known as he has won 1st place in nearly all of the competitions he has entered.

The Spartan Bodybuilding Classic is the final bodybuilding event before the national Mr. Belize bodybuilding competition, scheduled this for October.

BBN will have the full results and highlights of the competition.