Basketball Federation writes to PM over management of Civic Center 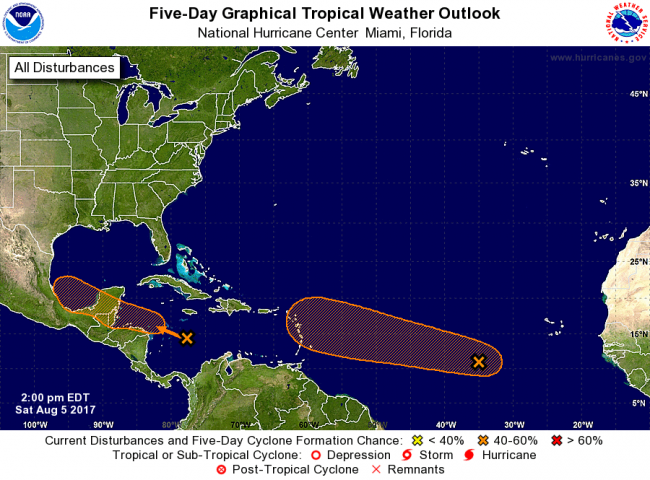 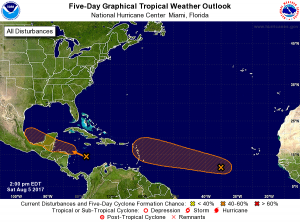 By BBN Staff: The showers and thunderstorms associated with a strong tropical wave located over the central Caribbean Sea are beginning to show some signs of organization this afternoon, and satellite wind data indicate that the wave is producing a small area of winds that are just below tropical storm force.

Additional development of this system is possible while it moves west-northwestward at 10 to 15 mph, and a tropical depression or tropical storm could form over the northwestern Caribbean Sea before it reaches the Yucatan peninsula late Monday or Tuesday.

Even if formation does not occur before the system reaches the Yucatan peninsula, a tropical depression or tropical storm could form over the Bay of Campeche during the middle part of next week. However, development would likely not occur if the system moves inland over Central America & southeastern Mexico and does not re-emerge over water. An Air Force Reserve reconnaissance aircraft is scheduled to investigate this system tomorrow afternoon, if necessary. Interests along the coasts of Honduras, Belize, & the Yucatan peninsula of Mexico should monitor the progress of this disturbance. It has a medium chance of becoming a tropical cyclone during the next 48 hours and five days.

Over the far eastern Atlantic Ocean, disorganized showers and thunderstorms continue in association with an elongated area of low pressure that extends more than a thousand miles southwest of the Cabo Verde Islands.

Although this system has failed to consolidate so far, environmental conditions appear conducive enough to support some development while this system moves west-northwestward across the tropical Atlantic Ocean at about 15 mph. It has a medium chance of becoming a tropical cyclone during the next five days.