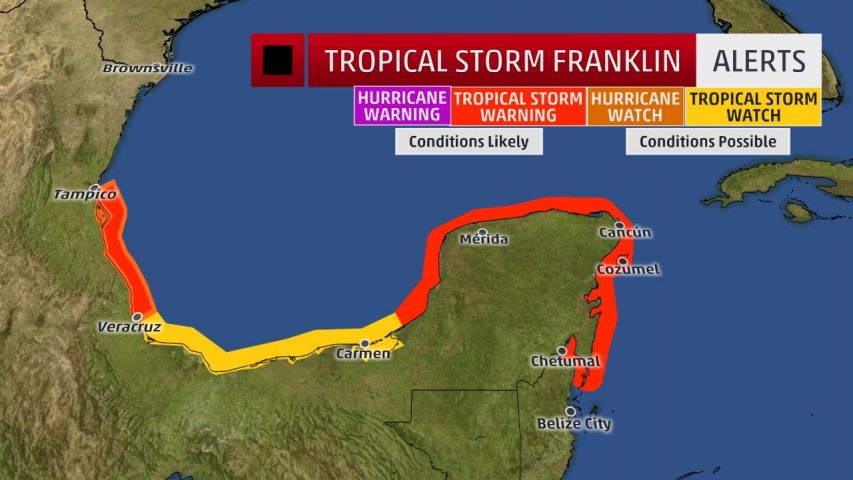 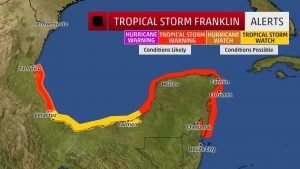 In Mexico, shelters were prepared across the area, with one specifically designated for the residents of Mahahual, a popular beach destination. Mexican officials had urged all businesses and gas stations to close early to help clear the streets. The Chetumal airport near the border with Belize was closed overnight.

The National Hurricane Center reported the storm’s center was 75 miles northwest of Chetumal and moving west-northwest at 14 mph this morning after making landfall overnight.

Franklin is expected to cross the peninsula and strengthen when it emerges in the Bay of Campeche tomorrow making a second landfall.

Rainfall amounts of three to six inches, with isolated amounts around 12 inches, are possible across the Yucatan Peninsula of Mexico and Belize through Wednesday, with the highest amounts over the Mexican state of Quintana Roo.

According to the National Hurricane Center, a hurricane watch has been issued from Puerto de Veracruz to Rio Panuco, while a tropical storm warning is in effect for the coast of Mexico from Chetumal to Sabancuy.

Strong wind gusts from Franklin may cause some localized tree damage and power outages in the Yucatan Peninsula throughout today.

Up to 15 inches of rain may fall in eastern Mexico through Thursday associated with Franklin’s final move inland. Flash flooding and mudslides are likely to be major concerns as Franklin grinds across this region’s mountainous terrain.

Mexican authorities have already evacuated some 300 residents of small fishing communities in the storm’s path.

The National Emergency Management Organization has issued an all clear for Belize.