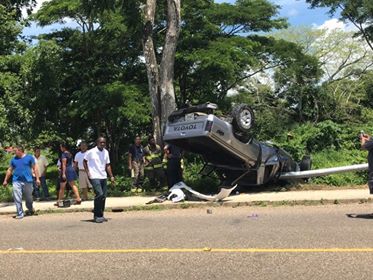 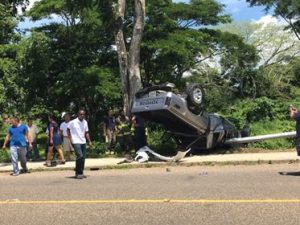 By BBN Staff: This morning around 10:30, Azel August, 19, of Santa Elena Town was driving a Pontiac SUV on the Loma Luz Boulevard in the direction from the new San Ignacio/Santa Elena Bridge to the La Loma Luz roundabout when he collided into the rear end of a Toyota pickup travelling in the same direction.

The Toyota pickup was driven by Justin James, 19.

Thais Escobar, 18, and James who were in the pickup both received severe head injuries and were transported to the KHMH.

Evian Escobar, 13, who was also traveling in Toyota pickup received abrasions on her right elbow, back, and complained of pain to the lower hip. She was transported to San Ignacio Community Hospital.

All injured person are from a Santa Elena Town address.

August has since been served with a notice of intended prosecution.