Elfreda, your daughters are being humiliated 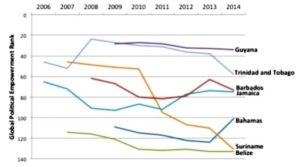 By Valentino Shal:  The Political Disempowerment of Women in Belize

Political empowerment remains out of the reach of Belizean women but it doesn’t have to be. Not with the long history of women’s political activism in Belize. Anne S. Macpherson starts the introduction to her book, “From Colony To Nation: Women Activists and The Gendering of Politics in Belize 1912 – 1982 with the story of Elfreda Reyes, who in the 1930s joined the fight against British colonial rule. Elfreda was a prominent speaker and organizer and was a founder of the nationalist campaign to secure a minimum wage for domestics at the time. The story of Elfreda’s activism is one of fierce determination and courage. She was an “agitator.” What would Elfreda think of the disempowered status of Belizean women today? Her story is missing from Belize’s history but the role she played in the political arena in her time is significant.

Using data from 2006 to 2014, the Global Gender Gap Report shows Belize consistently being at the bottom of sister CARICOM countries for the Political Empowerment Rank. This is not surprising. The overall presence of women in national decision-making is dismal and very little progress has been made in this area. There are currently only two elected women in the National Assembly. There are ongoing initiatives such as WIP Project run by the National Women’s Commission to provide training and support to women to engage in the political arena at various levels. The initiatives unfortunately have barely made a dent in the political exclusion of women. In 2007, the Convention on the Elimination of All Forms of Discrimination against Women (CEDAW) Concluding Comments recommended that countries take concrete measures to correct this type situation, including adopting temporary special measures, quotas and timetables. These have been reaffirmed by the recent report on the Situation Analysis on Gender and Politics in Belize supported by UNDP-Belize and the NWC. There have been no concrete steps taken by the National Women’s Commission or the Government of Belize to address this stark situation.

Women, admittedly, face several challenges in their participation in electoral politics. There are several however I will only discuss only two key factors here briefly. The first has to do with what is called the double burden. This burden incidentally is also partly the reason why women’s participation in the labour force is limited. Being involved in politics and governance at the highest levels is assume to require one to work long, inflexible hours, including evenings and weekends. Unlike men though, women are usually expected to meet their political responsibilities as well as continue to do the unpaid care work in the home and as a result, are faced with a double burden. This burden can limit women’s entrance, or advancement in politics and in some cases forces women to leave politics altogether.

The second has to do with access to funds to finance a campaign. Women generally facer greater difficulty women face in accessing campaign funds which in turn has a direct effect on their ability to compete in the electoral process. UNIFEM notes that “where controls on campaign financing are weakly enforced, women are at a disadvantage because they often begin their races with less access to money than men.”

These two factors alone represent a picture of an “uneven playing field” for women and men in politics. According to the Situational Analysis of Gender and Politics in Belize, women’s lower economic status means that they often enter politics in a disadvantaged position. Because women have the double burden of work inside and outside the home, they face greater costs in both time and money if they decide to run for office. Lack of access to campaign financing can prevent women from competing effectively. For many women, these realities mean that the race is over before it starts.

Beyond this, it is noted that political parties themselves have been reluctant to put in place effective measures to ensure that women are fairly represented either in their own internal decision–‐making processes or as candidates. Political parties continue to be primarily “old boys’ clubs” where power remains in the hands of men. Women who for one reason or another are “disliked” are side-lined by their more powerful male counterparts within the same political party.

The severely limited or even lack of political participation erodes the full enjoyment of human rights by all citizens. Article 7 of the CEDAW Convention specifically speaks to the elimination of discrimination of women to participate in the “formulation of government policy and the implementation thereof and to hold public office and perform all public functions at all levels of government.”

Unequal power relations between men and women, extend to other areas of societal life beyond politics. For instance, there is increasing incidence of gender-based violence some of which result in death. In terms of health young women ages 15 to 24 continue to show approximately twice the HIV transmission rate as men of that same age group. While adolescent and older men die mostly from risk-taking behaviours such as vehicular accidents, injuries (whether accidentally or purposefully inflicted) and HIV/AIDS. Women, on the other hand, suffer mostly from chronic illness such as diabetes mellitus, hypertension and heart disease. Why should women not have a voice at the highest decision-making levels to address these and many other problems being faced by Belizean society?

Most social experts and gender specialists both in Belize and abroad now strongly recommend the establishment of quotas specifically for women in order to mainstream their participation. The target for women’s political participation in parliaments is set at 30% which was the goal set by the MDGs. Studies shows that quotas with legal requirements work. For instance, Costa Rica passed legislation on gender quotas in 1996 and today, there is over 40% women participation in their legislature.

To make the drastic change to ensure that Belizean women are politically empowered will require the engagement of all citizens. We cannot continue to accept the status quo. What would Elfreda think of us today where women must sometimes provide sex to male brokers or campaign workers to get a “favour” that should be their right? As the Situational Analysis on Gender and Politics Report states, “a political culture that allows this sexual extortion to continue unchecked is highly unlikely to treat women as equals in other respects.” Elfreda, I am sorry to tell you, your daughters are being humiliated.