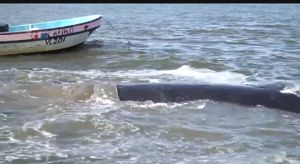 By BBN Staff: A Baleen whale died in southern waters off the coast of Punta Gorda last Friday.

According to reports from the Toledo Institute for development and Environment (TIDE), it received a call from concerned citizens around 3:00 on Friday afternoon about a whale sighted off the coast the PG coast in the Orange Point area.

TIDE personnel responded and found the 30-foot whale grounded in shallow waters. Several fishers had been trying to lead the whale back into deeper sea. One fisher even reported seeing the whale trying to swim out to the deep for about three hours but said it kept circling back to shore.

TIDE also reported that blood was observed coming form the whale’s blowhole while one of its fins seemed to be injured. The whale finally died around 5:00 p.m. on Friday. Samples were taken to determine the whale’s cause of death and for further analysis.