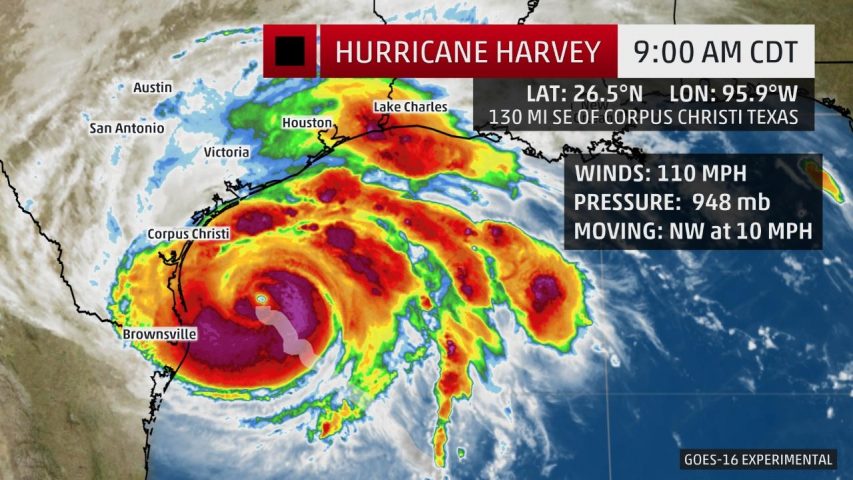 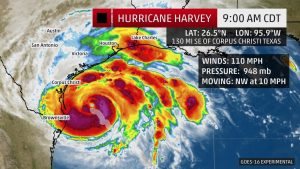 By BBN Staff: Last week, Belize and the Yucatan Peninsula had been monitoring Tropical Storm Harvey for possible formation. While approaching the Yucatan peninsula, Harvey dissipated and advisories were issued on the remnants of Harvey.

However, Harvey has now strengthened to a strong Category 2 Hurricane heading for Texas tonight or early Saturday morning. Forecasters say that Harvey will then stall or meander for several days, leading to a devastating flood threat in parts of Texas and Louisiana.

Threats associated with Harvey include extreme rainfall leading to severe flooding, storm surge flooding, and damaging. Hurricane, tropical storm and storm surge warnings have been issued for parts of Texas.

According to the Weather Channel, Hurricane Harvey continues to intensify and will be the nation’s first Category 3 landfall in almost 12 years tonight or Saturday morning, poised to clobber the Texas Gulf Coast with devastating rainfall flooding, dangerous storm-surge flooding and destructive winds this weekend that could leave parts of the area uninhabitable for an extended period of time.

Tropical storm-force winds are already nearing the Coastal Bend of Texas, with 30 mph sustained winds reported at the Corpus Christi Naval Air Station, according to the National Hurricane Center.

The NHC also issued its first-ever public storm surge warning, which includes a swath of the Texas coast from Port Mansfield to High Island. This means a life-threatening storm surge is expected in the warned area in the next 36 hours.

Harvey poses no threat to Belize.