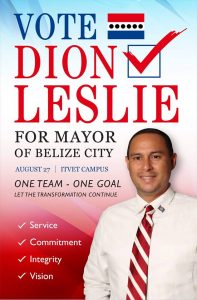 By BBN Staff: Two time Belize City Mayor, Darrel Bradley, will not be seeking a third term. And so two of his incumbent councilors, Philip Willoughby and Deon Leslie, have both offered themselves as his replacement.

Today, there is an open convention at the ITVET compound to select the UDP’s Mayoral candidate and slate in Belize City. Polls opened at ten a.m. and are scheduled to close at 5 p.m.

It is reportedly an open convention which means that not only card carrying members of the UDP can vote, but those citizens who are not known to be wholehearted PUP supporters.

A source revealed to BBN that as many as 2,000 voters have already made their way to the ITVET to support their candidate.

That source also indicated that Councilor Deon Leslie is ahead of his colleague councilor Willoughby. Leslie, enjoys the support of the UDP executive.

According to our sources, the results of the convention will be released by 8 o’clock tonight.