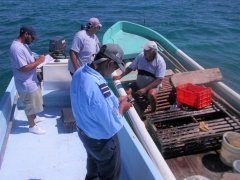 By Jon Ramnarace, WCS: The Implementation of Spatial Monitoring and Reporting Tool in Belize

A small weathered, pale-blue skiff sits on the Caribbean Sea. Years exposed to sun, salt and wind have taken their toll on it. As emerald blue-green waves rock it up and down, a loud crack pierces the air, and then another. Sitting in his skiff a fisherman is working on his catch, breaking the hard conch shell to remove the delicious mollusk from inside. He smiles as he works removing one after another, after another, thinking of the payment to come.

Suddenly he stops and listens to the wind. He stands! Shading his eyes, he peers over the horizon squinting, continuously adjusting his eyelids to the bright sun. He dips back down to the boat and frantically starts throwing the conch he has been processing into a plastic bag along with the shells, then tosses the bag overboard. He doesn’t even look down to see the bag sink from view when he yanks the pull string of his engine and begins heading south.

While all this is happening, the sound of an outboard engine approaching becomes louder and louder. A 30-foot skiff comes into view, full throttle in pursuit of the fisherman’s boat. On the bow of the shimmering white skiff, in full black letters, reads “BELIZE FISHERIES DEPT.” Suddenly the Fisheries skiff slows down at the spot where the plastic bag was tossed, someone dives overboard into the crystal waters. The fisherman breathes a sigh of relief as he feels the pursuit has ended. But the captain resumes full throttle and the pursuit continues. The fisherman’s 40hp motor is no match for the 400hp attached to the Fisheries’ skiff and the chase is soon over.

The men in the Fisheries’ vessel identify themselves to the fisherman as Fisheries Enforcement Officers. They secure the fisher’s boat to their own and board his vessel. The officers explain that they have been monitoring him and know that he has been fishing conch illegally in the protected marine reserve. Even though the small skiff reeks of fresh out-of-season conch, the fisherman denies it, saying only that he was making his way through the reserve to his camp.

The Officers keep their composure and take the fisher to the area where the first officer had gone searching for the illegal product in the sea. The officer in the water is holding a black plastic bag. His fellow officers help him onto the boat. The fisherman’s body language has changed now, he has become defensive, and it will take a further hour of interrogation for him to admit that the bag and its contents are his.

Each conch is individually weighed, measured and recorded. The officers take out a large dry bag containing a digital camera to record pictures of the product; a GPS which they use to get the coordinates of where this illegal activity occurred; and a notepad and pen which they use to record the details of the bust. All of this cost them another hour and a half. In total, they spend three and a half hours processing the fisherman. The crew would like to patrol more but it is already late afternoon and they need to return to headquarters to write up a charge-sheet and patrol report for use in court.

The sea is calm and it takes them an hour to return to HQ. Unloading and washing the boat takes another hour. While this is being done the arresting officer is writing up a charge sheet which takes another two hours. By the time the officers are finished it is 8pm, almost seven hours from making the bust to levying a charge against the fisher

Stories like this occur daily for the men and women who protect our marine and terrestrial parks and reserves. For many, this is a job that is ridiculed, criticized and unappreciated.

But, for many enforcement officers their jobs remain close to their hearts, they have seen what years of overfishing, pollution, poaching, logging and many other illegal activities have done to our beautiful country.  They understand how the environment is dependent on a balance of each species. Many give long hours and still wish they could do more, but alas, they are only humans and can only do so much with the limited resources and outdated equipment they have.

But, there is hope. An Android application called the Spatial Monitoring and Reporting Tool (SMART) is being promoted and implemented by the Wildlife Conservation Society (WCS) throughout the marine and terrestrial reserves in Belize.

So, what is SMART and what does it do? Well, as the name suggests, it is a tool, a piece of software to be precise, developed by global conservation organizations* that work closely with protected area authorities and natural resource management stakeholders. The software makes it possible to collect, store, communicate and analyze ranger collected data on illegal activities, wildlife, patrol routes, and management actions to understand where efforts, and limited resources, should be focused.

For park rangers and other enforcement officers, SMART is loaded onto their Android phone or GPS device. When they need to document an illegal activity, SMART automatically gathers data on one device, rather than multiple. This means that GPS coordinates are automatically taken, incident particulars are captured in digitized form and pictures are taken and associated with that GPS point, on the same device. Processing time is drastically reduced, and user errors are minimal, thanks to onscreen prompts.

The data is automatically uploaded to an online server when the device comes within cellular service range. And, upon the officer’s return to base, the data is already loaded via SMART software onto his desktop or laptop computer. A summary report is just a click away and takes only seconds to create; giving the rangers/officers more time to patrol and less time having to finalize a charge sheet and/or a report. A job that previously had to be done by three or four men could now be completed by one or two.

SMART offers major improvements and opportunities in data analysis and reporting, showing illegal activity location hotspots, illegal occurrence frequency over time, resources used and many other useful reports. This allows reserve and park managers to effectively plan patrols and helps them to focus their efforts and limited resources toward achieving better patrol and enforcement results.  SMART has already been deployed in 16 marine and terrestrial parks and reserves throughout Belize. The effects of which are already being seen by those using it.

We affectionately refer to Belize as “The Jewel” but only a few know the battles that are waged daily for our natural resources on both land and sea to be able to keep that moniker. The fight will continue and tools such as SMART will bring those in this righteous fight up to date technologically, and hopefully give them the advantage to preserve our country’s natural resources and beauty for years to come.