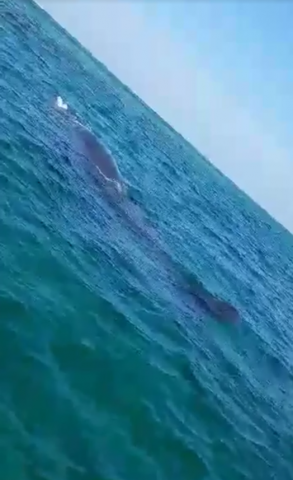 
By BBN Staff: According to a report from 7 News, yesterday a sperm whale was found dead near Silk Cayes in Stann Creek district.

This is the third whale that has been found dead in Belizean waters since last year.

7 News interviewed Jannelle Chanona, Vice President of Oceana Belize and asked about the recent deaths of the whales.

Chanona said that in 2016, a humpback whale died and almost 3 weeks ago, a baleen whale was found dead and now a sperm whale.

According to Chanona, they have found the whales dying or dead but there has not been proper investigation to reach a definitive reason for the cause of death.

Chanona believes that this incident highlights the reason for the marine stranding network and other entities to come together to form a cohesive response so that they can determine what is causing these deaths.

“I think it is really highlighting that we need to determine if it is plastics doing this, boat strikes. We know that there is increased marine traffic. These whales travel significant distances or you know coming into collision paths with large shipping vessels like seismic activity we know that has been the cause for standings and negative outcomes with marine creatures on sea creatures on a whole. Especially whales and dolphins that depend on Sonar, ” Channona said.

Samples are being collected from the 30 foot long juvenile as investigations are being carried out to find the cause of death.