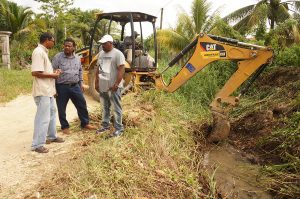 By BBN Staff: Today, Minister of National Emergency Management, Edmond Castro was on a working tour in Punta Gorda. Castro was welcomed to the municipality by Punta Gorda Mayor Fern Gutierrez and he accompanied NEMO District Coordinator Kenton Parham and Assistant Coordinator Dennis Williams on an inspection of areas where flood mitigation works have been carried out in that town and surrounding communities over the past six weeks.

Those areas known to be susceptible to seasonal flooding are Hopeville, Magoon Area, Cattle Landing and Jacintoville.

Gutierrez thanked NEMO for the works carried out and said she is certain that it will greatly alleviate the flooding situation. Castro stated that he is pleased that NEMO has been able to assist.

Similar works have been executed this year in Rural Belize District, Corozal and Cayo District, including San Ignacio and Bullet Tree which were also recently affected by severe flooding.

Flood mitigation works will commence in Red Bank, Sarawee and Hope Creek in the Stann Creek District next week.