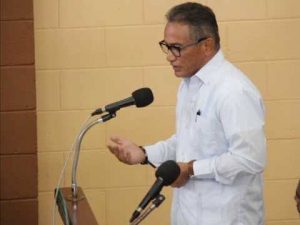 By BBN Staff: PUP Leader, John Briceño, has today written Prime Minister Dean Barrow registering his distaste about the incidents of corruption in government. Briceño in his letter has pointed to a list of demands that he hopes to be met by Barrow.

Briceno’s letter began, “For too long, the good people of Belize have been fed a constant diet of corruption in the highest ranks of the Government you lead. You have presided, as Prime Minister over a Government that facilitated and condoned the bucket sale of nationality, passports and visas orchestrated by your Ministers and their cronies…”

Briceño pointed to the “pillaging of the land resources” under the leadership of Barrow’s former Deputy Prime Minister Gaspar Vega. He also pointed to the criminality and abuse documented by the Auditor General on several ministries.

Briceño then turned his attention to Vega’s son, Andre Vega, who received lands and compensation for a fraudulently issued and forged land title. According to him, Barrow has done nothing about misfeasance in public office.

Briceño has called on the Prime Minister to: Establish a Commission of Inquiry into the Ministry of Lands for the period 2008-2015, Instruct the Attorney General to initiate a claim for misfeasance in public office against Gaspar Vega and recover all ill-gotten gains by him and his family, instruct the UDP members on the Public Accounts Committee to vote in support of having PAC meetings public and cause his nominees on the Integrity Commission to vote in favor of the PUP’s call for all public officials to file returns since 2012.