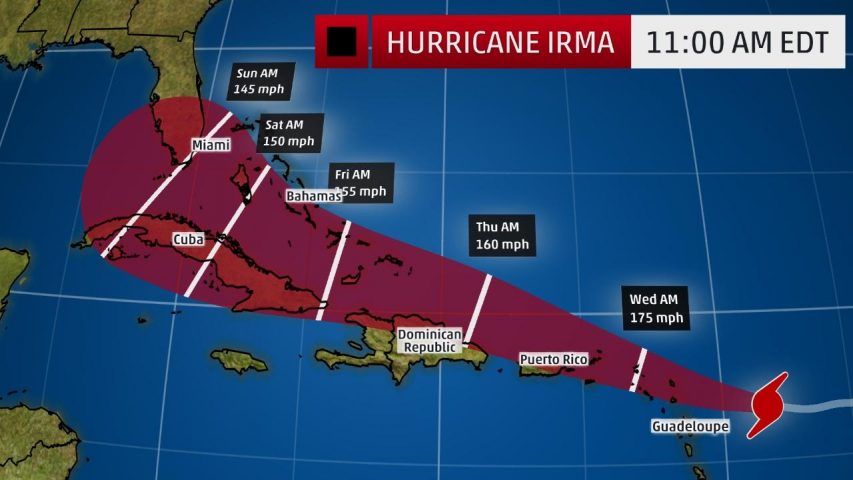 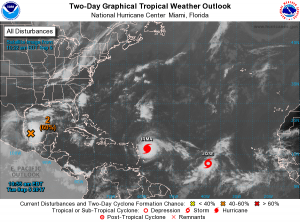 By BBN Staff: This morning, the National Hurricane Center (NHC) reported that Irma is now an extremely dangerous category 5 hurricane. The NHC says that preparations should be rushed to completion in the hurricane warning area.

The government of the Dominican Republic has issued a Hurricane Watch from Cabo Engano to the northern border with Haiti and a Tropical Storm Watch from south of Cabo Engao to Isla Saona.

A Hurricane Warning is in effect for…

A Hurricane Watch is in effect for…

* Dominican Republic from Cabo Engano to the northern border with

A Tropical Storm Warning is in effect for…

A Tropical Storm Watch is in effect for…

* Dominican Republic from south of Cabo Engao to Isla Saona

According to the NHC, the eye center of Hurricane Irma was located near latitude 16.7 North, longitude 57.7 West. Irma is moving toward the west near 14 mph (22 km/h), and this general motion is expected to continue today, followed by a turn toward the west-northwest tonight.

On the forecast track, the dangerous core of Irma will move near or over portions of the northern Leeward Islands tonight and early Wednesday.

Some fluctuations in intensity are likely during the next day or two, but Irma is forecast to remain a powerful category 4 or 5 hurricane during the next couple of days.