Saldivar has doubts about Amy Forte 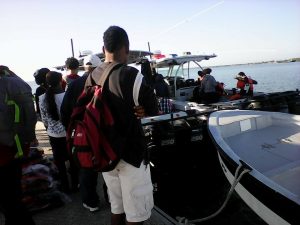 By BBN Staff: Minister of Defense John Saldivar had only apologies for those that disagree with him, but none for using government resources in transporting his football team to and from matches in the cayes.

Saldivar was heavily criticized earlier this year when it was discovered that he was using boats donated to the Belize Coast Guard, by the United States Government to take the Belmopan Bandits to their games.

He went on to say that if any of his colleagues do not share his view, he will not argue, but will not change his stance because helping his people is the reason he is in politics.

Cabinet ministers such as Anthony “Boots” Martinez, Minister of Police Elodio Aragon Jr., Deputy Prime Minister Patrick Faber, and even the Prime Minister himself had all, on different occasions, given opinions to the effect that it was unethical for Saldivar to use the boats for that purpose.

Saldivar, on one such instance, took to social media to respond  to one such criticism, leading many to speculate that his comment was aimed at his political rival, Patrick Faber. After Faber went on record saying that he would handle the boat situation differently, Saldivar posted on his Facebook account saying, “To those who would not do what I have done…please allow me to be me while you continue to be you and let my people be my judge and your people be your judge!!!”

Adrienne Galanek, Chargé d’ Affaires, U.S. Embassy in Belmopan, said that the embassy received assurances from GOB that the issue with the usage of the boats would not happen again.