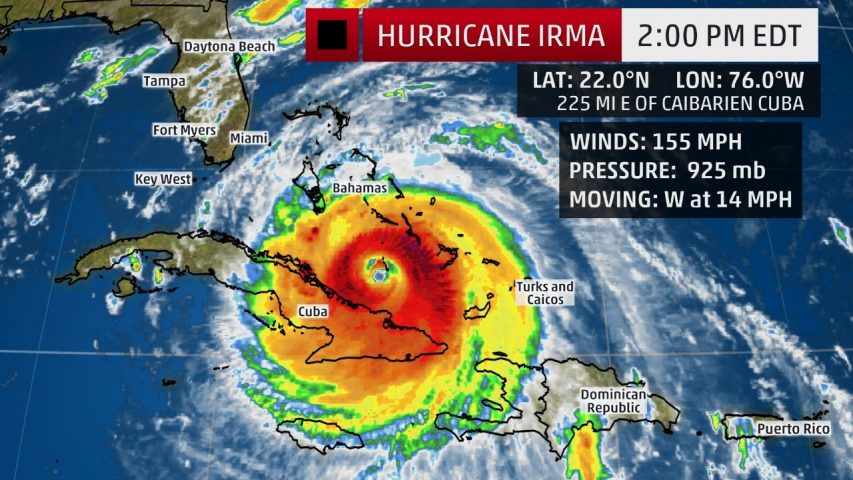 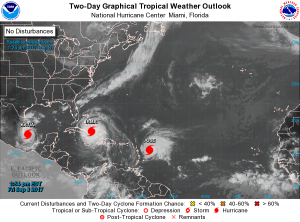 By BBN Staff: The National Hurricane Center (NHC) is closely monitoring Hurricanes Irma, Katia and Jose in the Atlantic.

As of 11 this morning, the  eye of Hurricane Irma was located near latitude 22.0 North and longitude 75.3 West. Irma is moving toward the west-northwest near 14 miles per hour and this motion is expected to continue for the next day or so with a decrease in forward speed.

A turn toward the northwest is expected by late Saturday.

Forecasters say that the eye of Irma should move near the north coast of Cuba and the central Bahamas today and Saturday, and be near the Florida Keys and the southern Florida Peninsula Sunday morning. Maximum sustained winds are near 150 miles per hour with higher gusts.

A Storm Surge Watch has been issued from north of Sebastian Inlet to Ponce Inlet.

A Storm Surge Warning is in effect for:

* Sebastian Inlet southward around the Florida peninsula to Venice

A Storm Surge Watch is in effect for:

A Hurricane Warning is in effect for:

* Jupiter Inlet southward around the Florida peninsula to Bonita

* Southeastern Bahamas and the Turks and Caicos Islands

A Hurricane Watch is in effect for:

* North of Jupiter Inlet to the Flagler/Volusia County Line

A Tropical Storm Warning is in effect for:

A Storm Surge Warning means there is a danger of life-threatening inundation, from rising water moving inland from the coastline, during the next 36 hours in the indicated locations.