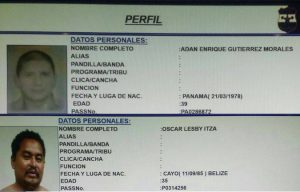 By BBN Staff: According to NoticiasTRV Salvador, a Belizean and a Panamanian have been detained by authorities pending charges for carrying almost half a million dollars.

The men will be charged for money laundering.

The news report states that the Financial Intelligence Unit and the Attorney General of the country are initiating criminal proceedings in La Paz, Salvador.

The Belizean was identified as Oscar Lesby Itza and the Panamanian as  Adán Enrique Gutiérrez Morales.

According to the report, the men were caught after police were deployed at the airport after they observed their behavior after arriving in the country. When police checked their bags, they found hidden exactly $ 499,460 ordered in packs of $ 20.00 and $ 50.00.

The prosecutor assigned to the case explained that the accused told police that the money would have been used to make payments in a Panamanian bank but that it was not accepted because one of them has ties with the Mara 18 gang.

The prosecutor also explained that police haven’t established the lawful origin of the money but it is believed to be of a company that is based in Belize.

Police also found residue of cocaine on the money.