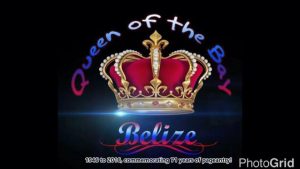 By BBN Staff: After multiple press releases circulating contradictory information on who will be crowned Queen of the Bay this morning, Belizeans are anxiously awaiting the ceremonial launch scheduled for 9 a.m.

Yesterday the National Celebrations Commission issued a release saying that the 2017 pageant winner Aaliyah Ysagguirre would be crowned; however, around 3 a.m. today, the Queen of the Bay Secretariat issued its own release, saying that Esmeralda Cal would receive the crown.

The controversy started on Friday, when the Chair of the Queen of the Bay Committee, Zenaida Moya, called the 2017 winner of the pageant, to tell her that she would not be crowned because the judges “re-assessed” the scores, days after the pageant had concluded.

The Stann Creek and Belmopan District committees for the pageant along with over 20 past Queens have all voiced their disappointment with the decision, which seems to have been made by Moya; given that four of the seven judges have gone on record with the Stann Creek committee to say that they did not reverse their decision.

The Stann Creek Committee later met with the Chairman of the National Celebrations Committee, Minister of Culture Patrick Faber, who decided that Ysaguirre will be crowned.