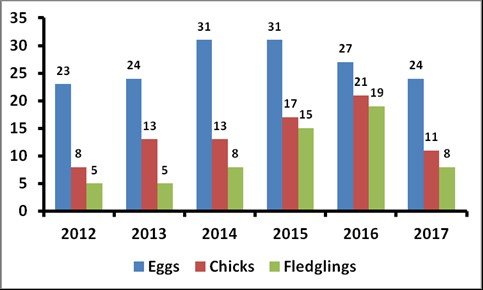 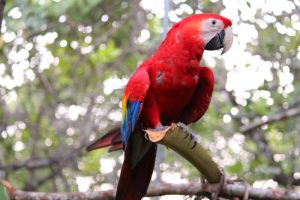 By BBN Staff: The Scarlet Macaw (Ara macao cyanoptera) representing Belize’s largest parrot species is locally endangered due to poaching and is listed in the Wildlife Protection Act as a species of conservation concern.

For Belize, it is estimated that the population are around 200 individuals (Matola & Sho 2002). Nationally, the Chiquibul Forest is the key foraging and breeding habitat for the species.

The Friends for Conservation and Development (FCD) annually undertakes a seven-month biological monitoring program aimed at protecting and documenting the wild populations of macaws.

Specific effort is directed since FCD has identified the macaw as the flagship species for the conservation and management of this key biodiversity conservation area.

CD says that poaching is a major threat to the survival of Scarlet Macaws in Belize.

In 2011, poaching rate was at 89% which was leading to the demise of the wild population. But with the adoption of an adaptive and robust management and conservation strategy, the incidences of poaching were reduced to an average of 35% from 2012 to 2015. Thereafter from 2015 to this period, none of the chicks monitored have been lost to poaching. The success of bio-monitoring efforts has been possible with support from the Belize Forest Department, Wildlife Conservation Society, the late Dave Tyrie, Ray Mayhew and Jacqui Rukin from the United Kingdom, the US. Department of the Interior, Belize Electric Company Ltd., UKAid/DEFRA, the Republic of China (Taiwan), the Estate of ULF Rasmussen, and the Belize Wildlife and Referral Clinic.

With the passage of Hurricane Earl in August of 2016, three of the most successful scarlet macaw nests were destroyed, thus it was unclear how the macaws would have responded during the 2017 breeding season.

FCD reports that although the breeding season started slow, a total of 9 breeding pairs were reported, resulting in the laying of 24 eggs. Eleven chicks hatched and eight of these chicks were able to fledge successfully into the wild.  Three of the chicks that perished were lost due to natural predation.