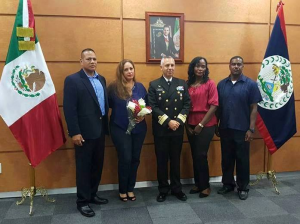 Saldivar was hosted by Mexico’s Secretary of Defence, General Salvador Cienfuegos Zepeda, while Admiral Borland and Colonel Ortega were hosted by the Secretary of the Navy, Admiral Vidal Francisco Soberón Sanz.

According to the Belize Ministry of Defence Facebook page, the purpose of the visit was to strengthen and improve the partnership and cooperation between the forces in training, capacity building, joint operations, logistics, medical support and border security.