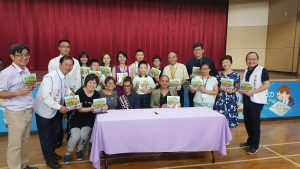 By BBN Staff: Belize’s visually impaired hero Rowan Garel arrived in Taiwan on Thursday, September 14, accompanied by his mother Milagro Garel. The pair will be there for a week of activities to celebrate Rowan being a recipient of the Chou Ta-kuan Cultural and Educational Foundation’s 2017 Global Fervent Love of Lives Medal.

Chou Ta-Kuan, a young Taiwanese poet who lost his battle to cancer in 1997 at the age of 10, had great enthusiasm for life. In one of his poems he wrote, “I still have one leg; I can stand on the earth!” For the past three years, the Foundation has held workshops, seminars, conferences and camps to communicate Ta-kuan’s belief to the public. Recipients of the Global Fervent Love of Lives Medal Award have impressed the world with their undaunted courage and heroism against challenges and diseases and have attained remarkable achievements through their ardent endeavors to benefit other people.

Diane C. Haylock, Ambassador of Belize to the Republic of China (Taiwan) was invited to speak at this event. She remarked that, “Meeting Rowan left a lasting impression on me, of one who was wise beyond his years; one who exemplifies positivity, humanism, consciousness; and one who bravely, boldly, courageously face adversities in life.”

Rowan was also given the superb opportunity to launch his bi-lingual book, “Climb, Walk, Dive – The Adventures of Rowan Garel” at Taipei Municipal Xing An elementary school in the presence of the Chair of the Foundation, the principal of Xing An as well as a selection of students.

The book, initially published in 2016 in Belize in English and published in Mandarin as of 2017, was authored by Katie Usher and illustrated by Gia Martinez, two Belizean artists inspired by Rowan.

The book was translated into Mandarin by two students from Xing An elementary school, and at the book launch, both young men were proud to animatedly recite Rowan’s story to their peers. At the end of their presentation, Rowan took center stage and everyone sat in amazement as Rowan brought the stories of his inspiring accomplishments to life. Garel did not leave the stage without reiterating to the students that it is essential to dream big, but of utmost importance is the effort to ensure that every step is taken, regardless of how challenging it may seem, to fulfill those dreams.

At the end of the presentation, students were invited to meet Rowan and get their books autographed.

The Chou Ta-Kuan Cultural and Educational Foundation will be assisting in the sale of the books and will donate all proceeds to the Belize Council for the Visually Impaired (BCVI), which has done an exceptional job lending support to over 3,000 visually impaired children in Belize.

Rowan’s visit to Taiwan will culminate with him meeting another hero who has succeeded in overcoming many social challenges, President Tsai Ing-Wen, Taiwan’s first female president.