Government of Belize to join relief efforts for Dominica 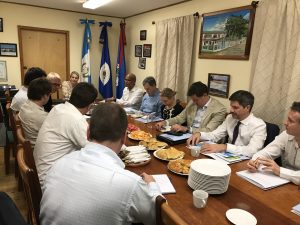 By BBN Staff: Today, a delegation of European Union Ambassadors, led by Malgorzatta Wasilewska, visited the General Secretariat of the Organization of American States Office in the Belize-Guatemala Adjacency Zone (OAS/AZ).

The purpose of the visit was to learn first-hand about the work of the OAS/AZ Office and a briefing on the most recent developments in the process by the OAS Secretary General’s Special Representative for Belize-Guatemala Affairs, Magdalena Talamas.

The students of the culture of peace program offered a musical performance in honor of the delegation.

The European Union is the major contributor to the project titled “Implementation of the Confidence-Building Measures in the Belize-Guatemala Adjacency Zone,” under which the OAS/AZ Office operates.

Other dignitaries who comprised the delegation included The British High Commissioner to Belize, Peter Hughes; Dylan Vernon, Ambassador of Belize to the European Union; and Said Guerra, in charge of Protocol and Consular Affairs at the Belizean Foreign Ministry.

The Ambassadors of Belgium, Finland, France, Germany, Italy, Poland and Spain were also among the special guests.