World Pharmacist’s Day to be celebrated next week 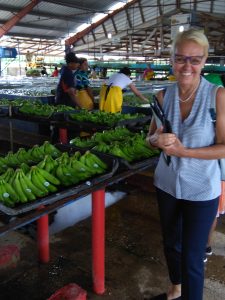 The electrification project, financed under the Banana Accompanying Measures (EU-BAM), benefited over 500 households and 13 banana farms in 27 southern communities. The project started in 2014.

“Electricity today is something we take for granted, many of us. Being able to turn the lights on, or use the fridge, being able to plug in your computer or your phone for a charge, many of these people didn’t have that,” Wasilewska said.

Carlos Perza operations manager for Go Bananas Farms 1,2 and 3, noted that the electrification has increased production at the farm while still lowering its operational costs. Peraza explained that the farm was originally powered by generators which ran on fuel. Electrification reduced the amount of fuel the farm needed by around 40 percent and reduced the amount of fuel that needed to be stored, and the noise and air pollution caused by the generators.

Residents also explained that some of them had been living in the area for 27 years or more without ever having electricity. They stated that their children experienced the largest benefit because they could do their homework more conveniently.

Vonetta Burrel, public relations manager for BEL, explained that the completion of the project forms a part of a larger system expansion project, which is valued at $35 million. The project is geared towards increasing access to electricity to new and existing communities.

“Currently 91 percent of the country has access to power from BEL, we are aiming to bring that up to 98 percent by 2020,” Burrel explained.